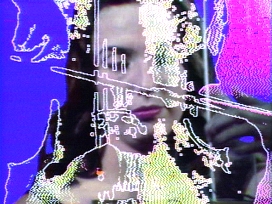 What is not video art?


The first video artists were not just experimental filmmakers gone over to a new medium but were forming an art movement with its own unique properties. The medium of video itself and the space, both physical and psychological, of television and the television set were core concerns. Video art may have had certain formal similarities with some experimental films, but there was no confusing a Nam June Paik installation with a cinematic experience.

Fast forward to the digital age and things have changed. The boundaries and concerns with which video art once defined itself have disappeared. Video art, experimental film, television commercials, motion graphics, documentaries, music promos, and even some mainstream cinema have all merged and crossed over. Many times the only distinction between the genres is how the creator wishes to be defined - film maker or video artist, or where the piece is shown - in an art space with a bench or in a cienema with seats. Often, it is both.

Warhol 's film Sleeping is transformed by Sam Taylor-Wood into the video art piece David, an hour of David Beckham sleeping. Gordon Douglas loops old films and it becomes video art, but then trains his cameras and microphones on another football player and creates another video art portrait of another football player, Zidane. Except that it is shown in cinemas and release on dvd, so it's not video art but a film. Another version is created for show in gallery spaces, and once again it is video art.

And while Douglas Gordon goes to the movies, various film makers go the other way. Peter Greenaway uses split screens, broken time structures and narratives to create works that are formally similar to a lot of video art. Spanish director Bigas Luna now creates video art. Both Gillian Wearing and Fischli and Weiss have created video works whose ideas have been copied and used for television commercials.

On the other side of things, video art spills over into the digital realm - motion graphics, animation, certain forms of net art and new media, live video and vjaying. Live video is now made collaboratively with musicians, performance artists, dancers, and poets. Non-visual artists and even non-artists are creating video works of quality, having assimilated the language of television and cinema from birth.

Video art, as an entity, continues to exist, of course, but now laps and flows into so many other media. It speaks to the definition of art, the line between art and non-art, between art and reality, art and life. From Duchamp's urinal to Warhol's Brillo boxes to Andre's bricks, everyday common objects have entered the world of art. Those objects and gestures question the difference between art and everyday life, and where the boundary between the two lies.

Whereas the furore caused by Duchamp or Warhol quickly died down, with their works being subsequently assimilated and sanctified, the presence of video and digital technology is different. It is not just a momentary gesture, but a technology that is good for artists, good for film-makers, good for holiday-makers, good for some very bad people, good for just about everybody. It has become omnipresent, and the questions it asks about ourselves and about our culture are not about to disappear. As with art and non-art, the distinction between artist and non-artist has become blurred. Warhol would have been pleased.

Cinema has been the dominant art form of the last hundred years. It is a marriage of all the arts, and has had a mystique and power over everyone across every culture in which it has entered unlike any other art form. Video and digital technology lets one be a director and movie-maker, producer and distributor, for better and for worse.

On the positive side, a generation of artists have been able to create works and installations that would have prohibitively expensive to produce otherwise. Festivals and screenings and the Internet have given artists a wide variety of means to show their work outside of art galleries. Many galleries with a sense of a changing world have supported their artists in this by initiating and promoting off-site projects and thereby promoting their artists, and, consciously or not, a wider and more dynamic audio-visual culture. And consciously or not, this opens galleries and the art world to dynamic potentials that are there for the making and for the taking.

A certain bewilderment and anxiety may be felt by some at the rapid pace of change, the wide variety of technologies, collaborations, and ways of showing (and selling) work, but for artists who have found in video and digital technologies the right means to express their particular visual and conceptual concerns, these are exciting times.