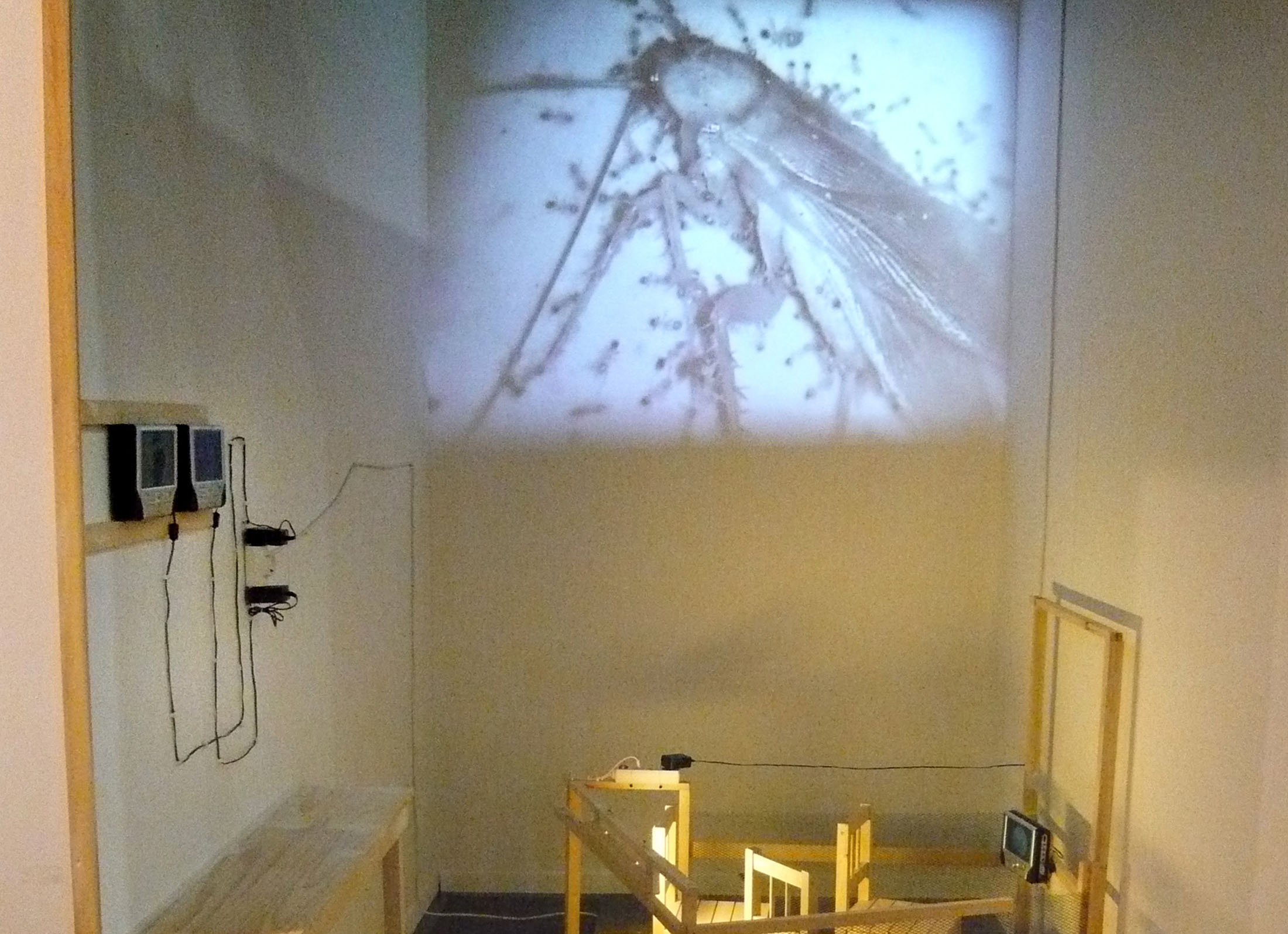 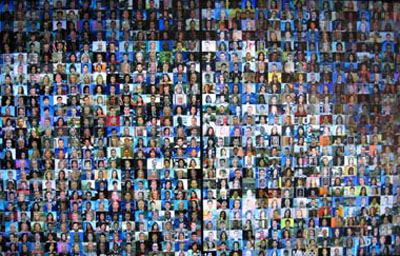 Reporters with borders, by Rafael Lozano-Hemmer at Guy Bärtschi Gallery


The 27th edition of ARCO (Madrid’s contemporary art fair) clearly chose to pursue the criteria that mark its most immediate aims, whose main thrust is the definitive professionalization and internationalization of the fair in a very competitive global context, and thus to lend the event a well-defined personality in line with new times and market demands. The economy rules, and major battles require great sacrifices. Hence the need to reinforce the participation of certain galleries from the U.S., U.K. and German markets, in detriment to regulars from Spain or galleries focusing on electronic art, such as New York’s Bitforms.

So, following a great expectations approach, the Dickens-like layout of the mansion was clear: the actual fair on the main floors, spacious with high ceilings and all the rest; and the junkyard of media art, curated shows, magazines, featured country, institutions and performances crammed into the attic. It might seem that the idea of distinguishing two tendencies in a practical way, the more avant-garde above, the more conventional below, along the lines of Art Basel (which plays with this same layout but in reverse), would be a positive and useful solution. However, what separates the two flights of escalators is much more than an uncomfortable distance: tidiness as opposed to the labyrinthine, order opposed to chaos, elegant boulevards as opposed to tenements, that is, spatial notions approached with distinct criteria.

Following this order, we should begin our survey of media art with the General Program. As a Duchampian paradigm, as far as electronic art goes, we find Wilfredo Prieto’s Closed Circuit, a cable plugged into itself at Nogueras Blanchard. Otherwise, I could cite myself and describe the same artist’s as in my article of last year; the list of contents is similar, to the delight of collectors and the disquiet of specialized critics. Among them, classics with well-known pieces and other more recent work, the always interesting projects of Rafael Lozano-Hemmer at Guy Bärtschi (Geneva, Switzerland) with Reporters with borders, in one of the stands that opted for work in which technology was emphasized. It also featured Jennifer & Kevin Mccoy and the latest from Daniel Canogar, who after a five year absence from Madrid, showed his cobwebs of cables at Max Estrella’s space. At Max Estrella we could also see the work of Eugenio Ampudia, that of Beuys, and two new ones: a wall installation with the word time rotating around, and a video with a motorcylcle race in the Prado. Nearby was a new piece by Charles Sandison about language.

If language is one of the concerns of media artists, architecture is the starting point for many other pieces. Photography, digital or not, is a fashionable trend that’s become popular lately (from Burtynsky to José Manuel Ballester, Esteban Pastorino, Alexander Apóstol and Ola Kolehmainen); in vídeo (Sergio Prego, Dario Urzay), not to mention video installations like Bernadi Roig’s Wittgenstein House, or that of Francisco Ruiz de Infante, to point local work. At Madrid’s Elba Benítez, Ruiz de Infante presented one of his complex, fragile and disturbing interventions of the program (Communities, 2008), which was the result of working at FRAC in Reims and at Panera (Lleida, Spain), a piece which was acquired by MUSAC (León, Spain). Finally, we shouldn’t forget that it’s possible to see the magnificent single-channel video programs that we’ve come to expect from the Galería Visor (Valencia, Spain).

In the attic of Hall 14, there was a plethora of things, very disorganized. First, the official inclusion of performances in the fair, which have recently experienced a certain evolution thanks in large measure to the use of technology, offering a program of eight suggestive proposals, chosen by Lois Keidan and Berta Sichel. Along the lines of a renewal and basically reminiscent of the Project Room, Solo Projects defines itself as a space dedicated to the presentation of works by a single artist, according to the selection (distinct from other fairs) of a broad group of experts. This section, accompanied by the sound of Li Songsong’s ping-pong players, offered interesting though predictable pieces, such as the video installation Do Universo do Baile by Dias & Riedweg, and 1iH0008 by Magdalena Fernández Arriaga based on the meta-diagrams of Helicio Oiticica.

Forming part of the General Program, but relegated to the attic of the top floor, another new section was launched: ARCO 40 (40 square meters/three artists). Among them, the utopian and futuristic work of Michael Najjar with his particular vision of “g-r-i-n technologies” (genetics, robotics, information technology and nonotechnology). The fair’s featured country could be found in the zone most like Brazil’s own ghettos. Dodging obstacles we came upon the work of major figures such as Eduardo Kac, Rosângela Rennó and Leonora de Barros, or emerging artists like Mariana Manhães.

But the pearl (a black one) as far as media art is concerned, is what was generated around the area specifically devoted to it, re-baptized for this edition as Expanded Box, which counted on Claudia Giannetti as curator (she is Assistant Editor of Media Art for art.es as well). Expert theorist and a curator with a long trajectory, she worked on the idea of widening the contents, tackling emerging currents that explore the influence and uses of technology in a multi-disciplinary sphere. In her discourse she goes beyond the black&white box to explore the expanded system of electronic art through two sections: the stands, with eight projects by a single artist, and single-channel video, with 12 pieces in three blocks, complementing all this with a research zone featuring digital displays.

In Screen, we could view pieces as outstanding as Sophie Whettnall’s Conservation Piece I, and Grassing, by Chen Yung-Hsien. In the darkness of the stands we discovered the subtlety of Text-fields, by Iván Marino, a work linked to visual poetry but with the conceptual and programmatic complexity of a computer generated project, the installation T, by Casey Reas or the electronic sculpture of José Manuel Berenguer, Luci, inspired by the light of fireflies and which in the end won the Deep/Datalogic prize. Not far away, were two institutional programs: that of MEIAC (Badajoz, Spain) and the Art and Life awards from the Telefónica Foundation, which confirmed the important role that technology has offered to the progress of contemporary art practices. In the first case, from the sphere of museum acquisition, recuperation and preservation of such significant pieces as the work of Pedro Garhel The Central Region, showing at their stand, and the presentation of a survey show that will serve to bolster a history of electronic art in Spain, to be inaugurated in June. The 10th Life Awards focused on the fusion of technology and biology, presenting projects sufficiently playful and mysterious to awaken the curiosity of any lost flaneur. Among them, the first prize, Etoy’s sarcophagus and the digital creatures of Christine Sugrue.