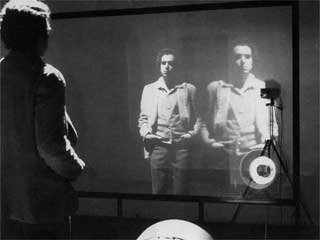 
Australian Center of Moving Images, March 22–May 27, 2007 The Australian Center of Moving Images (ACMI) probably presents the most important group exhibition dedicated to art in the form of video today. Curated by the expert, Christine van Assche, it premiered in La Caixa Forum of Barcelona in September 2005 and then was exhibited at the Taipei Museum in Taiwan, the Museum of Contemporary Art of Sydney, the Miami Art Central and the Chiado Museum in Lisbon.

The exhibition presents a landmark retrospective, including a series of work by top artists who have been working with video and multimedia installations since its early beginnings. The show embraces thirty-seven historical works from the Nouveaux Medias Collection of Pompidou Centre from 1965 to 2005.

Through the extensive and impressive selection presented, we discover a wide variety of techniques; from conceptual creations realized with raw media, to productions that employ the latest audiovisual resources, they are all inside of an intergenerational dialogue influenced by the artists. Without the figures present in this rich collection, video as an artistic medium would have never reached the aesthetic, conceptual and documental maturity that we now experience.

Although the first installation incorporated into the collection was “Present Continuous Past(s)” (1974) by Dan Graham, the oldest work is “Moon is the oldest TV” (1965), which was conceived by Nam June Paik. One of the latest works is “Baltimore” (2003) by Isaac Julien. In between these two extremes, are works by Samuel Beckett, Jean Luc Godard, Gary Hill, Chris Marker, Antoni Muntadas, Bruce Nauman, Tony Oursler, Pierre Huyghe, Vito Acconci, Aernout Mik, Stan Douglas, Valie Export, Cui Xiu-Wen, and Bill Viola.

The selected works allow us to analyze the last 40 years of audiovisual artistic production in the perspectives of history, gender and conservation. This chronologic approach lets the visitor understand the evolution of this new medium and the value of the artists' contribution.

The exhibition is structured in different sections: Imaginative Television and Quests for Identity From Video Tape to Installation, Post-Cinema and Contemporary Perspectives . Inside of today’s technological revolution, this exhibition merits the rebuilding of a truly current history and presenting to the public pieces that are already famous worldwide but rarely exhibited.

To review the history of this medium and remember the first generation of artists who worked with video, we should note Nam June Paik and his installation, “Moon is the oldest TV” , which represents the moon in different phases through seventeen monitors placed on pedestals inside of a dark room. Each monitor shows a different phase, in which the moon's shape is made by the transformation of an electronic signal through a magnet that is behind the cathode ray tubes of the machine.

Video is produced by a signal recorded on a magnetic or electronic base, without the need to develop the negatives, it is able to record and reproduce events immediately. Hand held video cameras brought mobility, fastness, and affordability to the art of moving images. This alternative became then extremely appealing to artists looking to reach mass audiences, a feat that would have been unimaginable for a single artist before. This is the certainly the case for politically motivated artists , who capitalize on this tool's mobility in order to document their work and divulgate it. The pieces from Dara Birnbaum, Johan Grimonprez, Peter Campus and Walid Raad presented in the show reflect these interests. In one example, Dara Birnbaum uses video to critique mass media content in Kiss the Girls: Make Them Cry (1979) especially in regard to identity patterns.

Another early work born in this period was “Going around the corner Piece” (1970) by Bruce Nauman. The piece is a square enclosed by four white walls and four security video cameras observing the viewer, who is continually observed. In the foot of every corner we can see the four monitors that show the recorded image. Bruce Nauman once stated that the observer has to experiment art as a slap on the neck, in order to generate the intensity that leaves a deep impression in his body and soul.

We can also call Peter Campus's “Interface” (1972) and Dan Graham’s “Present Continuous Past(s)” (1974) pioneer works that belong to a period when video had conceptual importance but little commercial value. Fortunately, that is not the value that makes the history of art and we can still enjoy these works.

In “Interface” Peter Campus invites the spectator to superimpose his reflection onto his projected image. Using this same concept, Dan Graham dramatizes in “Present Continuous Past(s)” interpretations of time inside of a room that is partially covered with mirrors where the viewer is simultaneously the subject and object of perception. The descriptive document written for the piece says “Mirrors reflect the present. The video camera records what happens immediately in front of it and all that is reflected in the mirror of the opposite wall. The observed view by the camera appears eight seconds after on the video monitor. A person who contemplates the monitor sees his own image eight seconds before and the reflection of the monitor on the mirror another eight seconds before, which means sixteen seconds in the past. In this way an infinite regression of temporal continuity is created inside a temporal continuity."

In the 1980’s a second generation of artists have joined the pioneers. This is why the first installations from Gary Hill, James Coleman, Bill Viola, Thierry Kuntzel, Tony Oursler and Marcel Odenbach joined the collection before the market passion started in the late 90’s.

In the beginning, the Pompidou's media program offered production capabilities to artists, and audiovisual studios were opened in the basement of the museum. The Pompidou has therefore produced and acquired many pieces through commission. This is the case with the artists Stan Douglas and Chris Marker.

“Area Quad I+ II” is a beautifully and hypnotically structured choreography by Samuel Beckett in which four people dressed in different solid colors walk along the sides of an imaginary square, avoiding the center point and considering it as conflict.

Bill Viola’s Reverse Television - Portraits of Viewers shows forty-four portraits of people in their homes staring at a video lens as they would watch television. VALIE EXPORT’s Facing a Family (1971) also reflects on the relationship of the viewer to television, capturing their immersion in the technology. Turn On by Vito Acconci (1974) confronts the viewer with uncomfortable close-ups that emphasize the psychological relation between the viewer and the performer.

The works of Chris Marker and Thierry Kuntzel also address the subject of memory. Chris Maker's “Immemory” (1996) merges a recollection of images from his own travels and imagination, merging fiction with reality constructing a poetic archive of impressions and records. In “Nostos II” (1984) by Thierry Kuntzel, distorted images demonstrate how memory constructs personal stories. In the work, images disappear in footage that represents oblivion.

The artists of the 90's took the historical approach of cinematographic language, but pushing its limits with new communication means. The deconstructive work and legacy of the 60’s would continue, but artists now had the need to propose innovative narrative structures, returning to the speculative dimension of cinema through provocative temptation.

Remakes, double and multiple projections, crossed stories, feedback, simultaneity, slow motion to isolate subjects, the acceleration that synthesize them, the direction of actors, production and divulgation, will take part in those new narrations that inow integrate into video art's new critical dimension.

The artists in the collection, Doug Aitken, Isaac Julien, Pierre Huyghe, Eija Liisa Ahtila and Ugo Rondinone use multiple projections in different configurations. All the tales in the exhibit need the presence of a viewer who can freely move and build the stories himself, through the proposals offered through time and space, elaborating their own representations regarding the common background that configures our history.

From the closed TV circuit to the cinematographic tale, installation has been a space of reflection on representation itself. The occupation of space and time has been reorganized according to editing plans that the new forms of exhibition follow. The fragmented time of installations provokes an awareness of our use of time, making us look at how we build it and how it is imposed on us by the current social and economic models.

Video: An Art, a History, , is undoubtedly a tasteful selection from the New Media Collection of the Centre Pompidou, a crucial collection that has reunited and preserved more than a thousand key new media pieces from the past four decades. It includes key art works by the following artists: