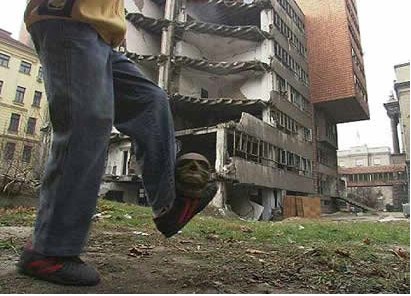 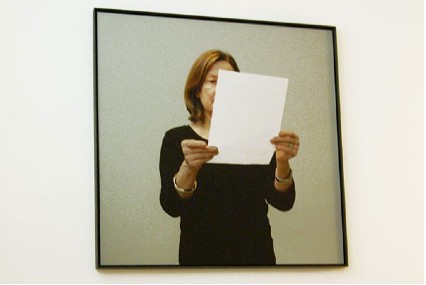 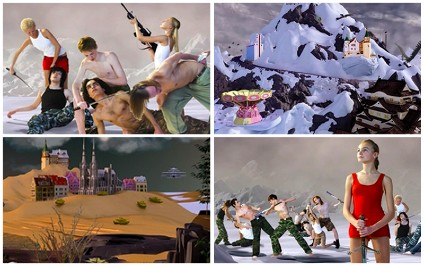 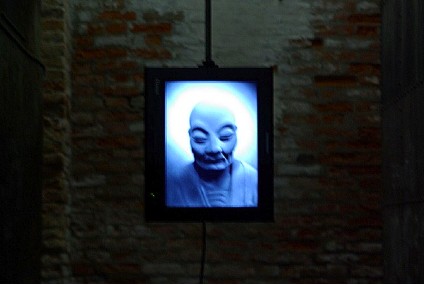 Starting with the Arsenale venue, Paolo Canevari shows an astonishing 12-minute video in which a kid plays with a misshaped soccer ball that turns to out be a human skull. The chilling effect of this scene gets only more reinforced by the scenario where the action takes place: the ruins of a former military facility of the Serbian Army in Belgrade, bombarded by the NATO allied forces.

Francesco Vezzoli didn’t disappoint us withDemocrazy, based on the soon-coming presidential campaign of the United States. In this case, the two fake candidates fighting for the Presidency are Hollywood actress Sharon Stone and French Philosopher Bernard-Henry Lévy. Through them, Vezzoli confronts two prototypes, fiction and knowledge, and deconstruct of the role of media’s manipulation.

Dolefullhouse was the single channel video installation by Japanesse Tabaimo, an animation that recreates a peculiar miniature house. By incorporating scanned drawings with the palette from Hokusai woodcuts, she combines the traditional Japanese iconography and images of the daily life.

It also paid off to use some spare time to see the series of five videos that integrate Yang Fudong’s work Seven Intellectuals in Bamboo Forest. The black-and white film reveals numerous references to other films, poetry and history. Through a melancholic and sensual mood, the artist tells us the history of seven modern intellectuals pursuing individuality, freedom and liberty.

Central Asia’s pavilion surprises us with an unsuspected good quality in videos for such a humble venue. I deliberately stopped by Almagul Menlibayeva, a feast of baroque opulence, where swans, sheep, odalisques, food and music compose an outlandish fusion with disco lights and exotic dancers. A cow head is served on a plate and ate by the companion at the table, as if in a sect’s ritual. As a leit motiv, a naked woman in a meadow adds a point of contrast to the frivolity of the mysterious feast scenes. Then, the festive tone returns again with the warped harem of women and sheep. Quite an ode to the Bacchanalia.

The Dutch pavilion, in the Giardini venue, is crowned by Aernout Mik’s three multi-channel video installation Citizens and Subjects. Subjects are the ones under the authority of a sovereign, and citizens are those entitled to the rights legally granted by a state or a nation. As a starting point, Aernout takes the training exercises of some State professionals such as cops or firefighters, and combine the images with real footage showing how the acquired techniques are taught. Through this, and also using sources like imitation, a mix of scenarios and repetition, he questions some concepts in today’s world, like authority, obedience or nation-state.

A petroleum warehouse was the venue for the Chinese pavilion, where Kan Xuan displayed her work at the Arsenale. Among the rusty tanks occupying the space, a selection of videos was distributed on screen monitors and projections. Through a poetic language, daily life in modern China –with topics ranging from the most banal objects to animations that transform Buddhist sculptures-- becomes her subject..

Sophie Calle, who represented the French pavilion, developed an installation that begins with the break-up letter sent to her by an ex-boyfriend. Several women from different professional backgrounds analyzed and interpreted the letter from various points of view: among others, length and number of ellipses and parenthesis, positivism or a dramatic reading performed by an actress who, in the meantime, is crafting origami shapes.

The Last Riot is a great epic animation located in a fantasy frozen landscape, a work that we found at the Russian pavilion and was signed by AES+F group. In this virtual world, the young lead characters are involved in a battle similar to those fought by the gods of Olympus or the heroes of the Modern Era. Technical quality and conceptual consistency show clearly through this almost Wagnerian display of strong epic impact, an ode to the end of history or ideologies.