Cube, by Gregor Scheider, a not released piece
Be the first to see what you see as you see it, by Runa Islam 2004
Ramallah/New York by Emily Jacir 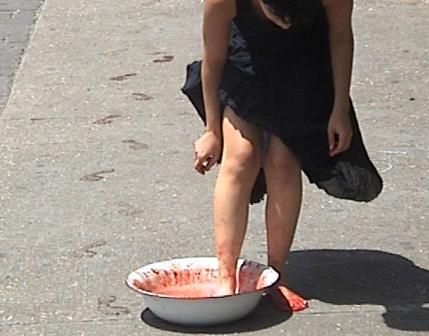 Who can erase the traces by Regina Jose Galindo
Series The little man, instalation by The Blue Noses

Time based art at the Arsenale of the Venice Biennale


Presenting a total of 419 artists, the 2005 Venice Biennale has been widely considered the Feminist Biennale, a name that results from the fact that not only were the international pavilion and the Arsenale (the site at the Biennale where independent curators present their artists) curated by two exceptional Spanish women, Maria de Corral and Rosa Martinez, but also because more female artists participated than ever before. This female touch is a landmark on this world-wide "Olympiad of creative performance," which has been held every two years since 1895, and an art exposition that continuously reminds the World of the need to keep thinking.

As a result of this feminine touch, the Arsenale this year welcomed visitors in a very radical way; Joana Vasconcelos, presented a 5-meter-high chandelier consisting of 14,000 tampons in a stainless for the last 20 years have subversively attacked the art world for its lack of ethics regarding female artists and artists of color.

Political controversy was created by the German artist Gregor Schneider who was selected to develop this year’s public piece at the Venetian San Marco square, and in consequence rejected and denied release by the city authorities for political reasons. What he originally created he titled the “Cube”, a representation of the Ka’ba, the central holy tower of Mecca that pilgrims walk around seven times before touching it. Schneider often confronts the viewer with the idea of duality, both psychological and political, through reconstruction and re-contextualization. The piece differs in material, measure and function, attempting to be an independent geometrical body, free of mental associations with the Ka'ba, revealing the intangible and enigmatic elements that remind us of our shared cultural characteristics. The project is explained through a video projection that can be viewed at Konrad Fischer gallery in Düsseldorf.

The slow video projection, “Be the first to see what you see as you see it” (2004), a piece by the Bangladeshi artist Runa Islam, evokes an intense emotion from the viewer through its perfect structure of film language. Similarly, Adrian Paci’s video attempts to transmit the painful feeling of neither being able to communicate nor being understood.

Palestinian Emily Jacir showed the double video projection “Ramallah/New York”, which smartly confronts the daily performances of people in similar jobs but different cities. This transcendent way of approaching the real is opposed by more common representations, making the similarities between eastern and western contemporary societies a surprise for many. She is represented by Townhouse gallery in El Cairo, Alexander & Bonin in New York and by Anthony Reynolds in London.

Jennifer Allora (USA, 1974) and Guillermo Calzadilla (Cuba, 1972) developed an ongoing performance during the Biennale. Guillermo, reading newspapers on top of a huge mud hippopotamus, blows a whistle each time he comes across an injustice. Like most of their work, this piece is a claim for environmental and ecological justice, and they are supported by the great taste of the collector’s family De La Cruz, and represented by Chantal Crousel in Paris and Lisson Gallery in London.

The Jury this year gave the Golden Lion to a young artist to Regina Jose Galindo, “for embodying courageous action against power in her visually precise triptych of performance and documentation”. A few of her strong video performances were shown at the Arsenale, including her undergoing hymenoplasty, receiving lashes to represent each women killed in her homeland of Guatemala, shaving all her body hair and waking naked through the Arsenale, and her video “Who can erase the traces” where she walks through the city, marking her trace with blood.

Six works by the realistic German sculptor Paloma Varga Weisz were included in the show as well, transmitting the reality of care and suffering. With “Zero Hero” by John Bock, we face a chaotic stage performance that mixes childhood fantasies and adult desires through a mix of 5 video projections, music by the Teddy bears, a pile of pullovers, and other common objects reinterpreted by feathers and colors to produce a grotesque scenario.

An exhibition on the leading figure on the London Club scene during the 80’s and 90’s, the Australian Leigh Bowery, occupied an entire room. Here it showed how he established “dressing up” as an art form. The retrospective includes his extravagant costumes, photographic documentation by Fergus Greer, as well as video documentation of his eccentric performances.

The installation “Words” by the Cuban artist Diango Hernandez, presented by Pepe Cobo Gallery, included the melancholic music of different languages, six neglected electrical poles, 500 meters of wires and a video projection about the political diversity in Cuba. The projection counts the number of presidents ruling Socialist countries in the last 50 years of history.
The humorous installation “Quest” from the series “The little man” by the artists’ group Blue Noses, makes fun of everyday life and the phenomena of elitism in art through 12 repetitive loops projected on cardboard boxes. They are represented in Russia by Gallery Guelman and in Berlin by Volker Diehl.

Pilar Albarracin shows two of her works at the Corderie, personifying different female roles while ironically distorting power roles; in her work she uses folklore as a tool to subvert cultural stereotypes from within. In Tears of Saint Lawrence, Olaf Nicolai invites us to a magical appointment with the sky: In the early hours after midnight, between the 8th and the 13th of August, facing the north-east with a 45º angle towards the horizon, we will be able to see the shower of falling stars, close to Perseus’ constellation, next to Andromeda. Another interactive piece is presented by the London based group of artists The Center of Attention, where visitors assist in their own funerals inside of a themed installation surrounded by 6 ambient works.

Sergio Vega’s room speculates in a very clever way the possible effects of Global Warming on the human brain, opening the reflection that the changing climate will eventually return the specie to a prehistoric stage.

Christian Büchel and Gianni Motti promised with great pleasure to do their worst. Since 1934 the US has had a perpetual lease on the 117 sq kilometers of the Guantanamo Bay, paying $2,000 annually ($4,000 today). The International Vienna Convention stipulates that perpetual contracts are invalid, therefore since 1959 the Cuban Government has requested the lease's cancellation, ceasing to cash the annual checks, but the US continues to refuse the bay’s restitution. This zone enables the US to avoid accountability to American law, creating an unregulated extra-territorial zone that flouts the fundamental principles of international law. In their “Guantanamo Initiative” this courageous couple has started negotiations with the Cuban government to rent the Guantanamo Bay, given that the current lease can technically be rendered null and void. This possibility serves as a pragmatic and peaceful solution to the problem of this lease. As new tenants, the artists will take necessary action against the US’s current illegal occupation of Guantanamo Bay.

Mariko Mori’s unique sculpture “Wave UFO” attempts to connect people with one another in a call for mutual understanding without borders. Carlos Garaicoa presented his light images in a dark room “On how the Earth wants to look like the Sky”, making us rethink our cities. Korean artist Kimsooja’s video projections show us the dynamic of different cities marked by suffering, maintaining the belief that silence would help.

Jun Nguyen-Hatsushiba’s aesthetic film “Ho! Ho! Ho! Merry Christmas”, recorded under the ocean, is a narration on imperialism, globalization and nationalism, reconstructing the memories of the dramas of his homeland, Vietnam. The artist is represented by Mitzuma gallery in Tokyo.

The exhibit of Antoni Muntadas “On Translation” with a leitmotif “Warning: perception requires involvement”. Developing since 1995, it explores the phenomena of codification, interpretation and transformation of contemporary cultural facts, and the mechanisms of translation, such as filters, adaptation and mediation. His “Table of negotiation II” had uneven legs, with different shapes and lengths, which requires piles of books to keep the World table balanced. Previously the books used to level it were related to the bombing of the telecommunication market, while this second version uses books focused on globalization and exploitation for profit of the arts and other cultural events.

In the Arsenale, the works of Rem Koolhaas and Santiago Sierra concern the same subject. Koolhaas presented an analysis of the growth of the art market, comparing it to the money market growth and studying the rise in number and size of contemporary museums. Sierra created a sound piece displayed in the entrance hallway of the Arsenale that explains the institutional regulations required to organize the Biennale.

Outside the Corderie we can find the monumental totem “Mare Verticale” by Fabrizio Plessi, the mirror architecture of Valeska Soares which contains an ethereal music stage, the delicate intervention of Laura Belem, “The Lovers”, along with the colorful “Plastic Bags” of Pascale Marthine Tayou, and the Ying Yang Garden of Ghada Amer, which reflects the difficulties of lovers who are unable to reach each other, neither physically nor emotionally.