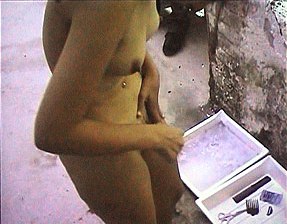 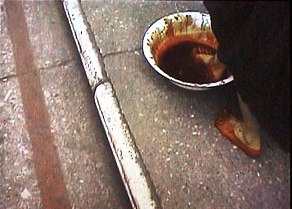 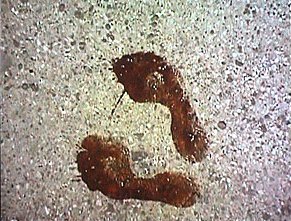 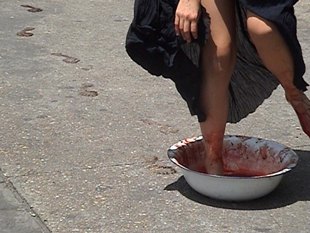 
I never get tired of insisting that Regina Galindo is one of the strongest artists of the generation that emerged in the mid-nineties. She attracted an unusual amount of attention when she appeared on the Guatemalan art scene with a performance in which she hung herself from a bridge ten meters in the air, reading little poems which she later scattered to the wind. Her intentions have always been at a higher level, maybe because she is so young or because she is often considered a mere instigator of public opinion or a circus spectacle. Nevertheless, few people know her work well enough to know that Regina 's work is not primarily about generational shock value. For someone who has taken unimaginable physical and psychological risks, who has transferred all the visual, metaphorical, symbolic and semiotic power of her work to her body, these arguments are truly innocuous.

Her recognition at the Venice Biennale, where she received the Golden Lion award, is reason enough to celebrate and –hopefully—to ask ourselves once and for all why the work of this artist goes beyond an attempt to get attention by disturbing the critics.

I have had many opportunities to accompany the artist in the realization of her projects, and I have seen myself absorbed by her demands for attention, her tears, her joys or physical pains becoming my own. In 2001 I had the true privilege to go to Perú as a guide, as Regina had decided to attend the Bienal Iberoamericana de Lima wearing a blindfold. She remained blindfolded from her departure from Guatemala City through five days at the Bienal, and returned home at the end to gradually return to normalcy. The trip was transformed into a melancholy experience for both of us, generated by her stubborn desire to venture into a labyrinth of darkness.

Travelling by car makes it impossible to really see or get to know a place; Regina 's decision would be inexplicable if it were not accompanied by a determination to express the responsibility implicit in seeing. In a world that produces millions of images every second, it has become necessary for the sense of sight to systematically discard many images. As in photography, we crop our lives to exclude what we do not wish to see; but, at the artist's insistence, I learned that when everything is presented to us in a state of fragmentation we become prone to indifference and lose our holistic sense of existence.

Another event of this nature was the show titled Vivir Aquí . It took place in the basement of the Museum Ixchell in the year 2000 and consisted of responses given by various artists in response to the simple question what does it mean to live in a country like Guatemala. In a time when uneasiness was becoming evident, the expressions were varied, poetic or heart wrenching. In the case of Regina, the reaction was to inject ten millimeters of Valium to sleep for several continuous hours. Her inaction showed a specific way to respond to an untenable situation.

However, through the years we have seen this in her unbridled activity and consistence in her artistic principles. To stone herself in a cube of brick for 24 hours in absolute silence and solitude; to chew her nails until her nails bleed in an act of self-cannibalism; to connect herself to an oxygen tank; to confront a professional fighter in a wrestling ring; to submerge her feet in a bucket of human blood and leave tracks in the pavement in order to reject the candidate Ríos Montt ; to get into a plastic bag and be disposed in the dump like human waste; to be hit many times like the numerous women killed in Guatemala or restore her own hymen through a surgical operation in order to say that the doubtful values of male-dominated society are perhaps experiences that agitate us and bring us closer to the pain of other people.

In her form of self-expression there does not exist the distance that we can have with photography, a picture or the most terrible fiction written by Castellanos Moya. There does not exist that distance to anesthetize and subtract us from the everyday work of this country. It does not merit the satisfaction to see the image without frightening us. We are included.