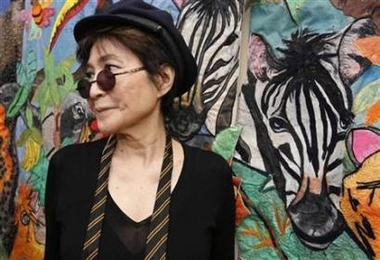 
Yoko Ono is a Japanese artist, musician, author and peace activist, known for her work in avant-garde art, music and filmmaking as well as her marriage to John Lennon. Ono brought feminism to the forefront through her music, and is also considered a pioneer and major influence of the 1970s new wave genre. She is a supporter of gay rights and is known for her philanthropic contributions to the arts, peace and AIDS outreach programs. Yoko Ono, whose first name translates to "ocean child", was born into a wealthy household: her mother's family was in banking, and her father had given up a career as a pianist to work as a banker in Tokyo, and later in branch offices in San Francisco and New York. Yoko was the eldest of three children born to Eisuke and Isoko Ono. Yoko didn't meet her father until Yoko and Isoko finally joined Eisuke in California in 1935. Yoko's mother enjoyed the life of the upper class Tokyo elite, and paid little personal attention to her daughter.In the 1940s Yoko realised she had to break away from the privileged upbringing imposed on her by the accident of being born into an aristocratic family. It was quite a liberal one by Japanese standards and her parents appreciated the arts, but they were too narrow-minded for Yoko. "It was very claustrophobic. I would have died on a spiritual level if I had not got away. I can remember going to concerts and then walking out after a few minutes and I kept wondering, "Why am I doing this?" I knew I wanted something different." Yoko found her privileged upbringing stifling and lonely. Yoko dreamed of breaking out but also of forging new ways of thinking her way beyond her isolation. As a child she attended the prestigious Jiyu-gakuen Music School in Japan, the training school for many Japanese composers. She was taught piano and composition, and played her first public concert at the age of four. A piece of homework reveals a telling early source for her work: she was asked to translate all the sounds she had heard that day into notes. Later, whilst attending Sarah Lawrence College in Bronxville at the age of twenty two, she heard birdsong and decided to translate it into musical notes. Finding it impossible, she made her first composition: Secret Piece (1955). Her musical training had included voice training in both opera and German Lied singing. The one constant in her life has been her work as as artist and musician, which began in the 1950s. "It is what I call my security blanket against so much that has happened to me", she said in an interview in 2000.
Are you Yoko Ono?