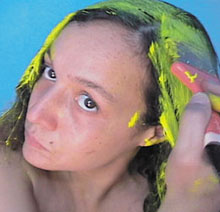 
Ximena Cuevas is one of Mexico's pioneering video artists, whose work explores representations of reality, national identity and gender. She began working at age 16, restoring film at the National Film Archives in Mexico and later worked in the art department of Costa Gavras's film Missing. She studied film at New York University in the early 1980s. Upon her return to Mexico, she worked on feature films in art and production until the 1990s, and has since devoted herself solely to video. Her work has been screened internationally at Sundance, the New York Film Festival, Mediopolis Berlin, the Museum of Modern Art in New York and the Guggenheim Museums in New York and Bilbao, among others.

Are you Ximena Cuevas?