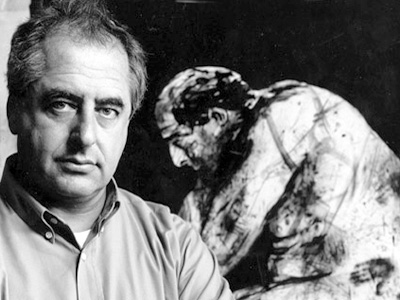 
Historically speaking, the work of William Kentridge is of seminal importance for New Media art production in South Africa. Kentridge has been active in film-making and the production of pioneering videos since 1989. He has worked in film and video for more than twenty years and his main themes focus on human emotions, and the act of forgetting and remembering. The treatment of such themes and the way in which he prefers to use his medium makes it logical for him to use a cinematic approach. Although he primarily uses drawing, his style and end products align with New Media in general.

William Kentridge is undoubtedly the most recognized South African artist, his work tracks a personal route across the fraught legacy of apartheid and colonialism through an innovative use of charcoal drawing, prints, collages, stop-animation, film and theater.

Kentridge first studied politics and African Studies at the University of Witwatersrand in Johannesburg (1973-1976) before studying Fine Art at Johannesburg Art Foundation (1976-1978). At the beginning of the 1980s he studied mime and theatre at the Ecole Jaques Lecoq, in Paris. Between 1975 and 1991 he was heavily involved in theatre, designing and acting in a number of productions; he was acting and directing in Johannesburg's Junction Avenue Theatre Company and worked as art director on various television films and series. Since 1992 he has collaborated with Handspring Puppet Company creating multi-media pieces using puppets, live actors and animation.

His interest in theatre continued throughout his career and clearly informs the dramatic and narrative character of his art, as well as his interests in linking drawing and film. Still, his primary focus remains drawing, and his theatre and film work as an expanded form of his drawing. His work as a draughtsman has been expressionistic and dominated by pastel and charcoal, and generally the drawings are conceived as the basis for his animated films. Kentridge's interest in animated drawings began during the early 1980s and influenced his drawing technique. During this time, he began to draw more cinematically and to refine the process of constructing lighting space to suit the composition. He also broke away from the strictures of Renaissance perspective and natural lighting modes. During this period he pioneered his personal style of spatial manipulation and incorporated these techniques into drawing scenes as well.

Kentridge created his first animated work in 1989. In this piece he introduces his distinct artistic technique where he manipulates one image on a single piece of paper, adding and erasing charcoal while the drawings progress. As the moving image consists of 24 frames per second, the process is fluid and energetic. He photographs each drawing before erasing some part of it, and then draws again on the erased section before photographing that for the next frame. Thus, instead of thousands of different drawings, he manipulates and changes one single drawing. When watching the finished work, the viewer is constantly struck by the 'organic' nature of the process. Kentridge always leaves traces of the previous drawing before adding an amendment. These remaining traces create an illusion of movement in the film, and are reminiscent of the visual effects created by old black-and-white films.

Kentridge's drawings for projection are decidedly more 'sketchy' and expressionistic than those he makes as separate artworks. The monochrome 'messiness' of the charcoal residue on paper, coupled with the 'incomplete' way in which they are rendered, emphasize the pervasive melancholy and desolation that is so typical of his landscapes and that evoke the moral bankruptcy, pathos and turpitude of the characters that he portrays. Kentridge works mainly with large pieces of charcoal, only occasionally adding blue and red to portray the ephemeral presence of water and other signifiers. There is no emphasis on detail for its own sake. These works portray an open-ended excursus that has no pre-determined outcome. He relies heavily on the viewer's process of internal closure to complete the narrative. Kentridge avoids a closed narrative structure because the 'story' that enfolds is open to interpretation by the viewer. He says that use of consecutive imaging is analogous to the use of words when one is speaking. Just as one does not test a sentence before speaking it, the sequence of drawing / partial erasure / drawing / partial erasure is the creative factor that determines how the narrative develops. He adds that the ordinary processes of human thought also help one to understand how art works as the sequence develops. In the film the musical accompaniments were initially sourced from existing recordings; however, later Kentridge commissioned specific soundtracks to accompany the films.

The political content and the unique techniques of Kentridges' work have propelled him into being one of South Africa's top artists. He has created animations of astounding depth dealing with political and social issues from a personal and autobiographical point of view. A theme running through all of his work is the concept of time and change, always reflecting his life and surroundings in Johannesburg. He does not portray South Africa as the militant or oppressive place that it was for black people, at the same time he also doesn't emphasize the picturesque state of living that white people enjoyed during Apartheid either. Instead, he presents a city in which the duality of man is exposed. In his series of nine short films he introduces two characters, namely Soho Eckstein and Felix Teitlebaum. These characters depict an emotional and political struggle that ultimately reflects the life of many South Africans of the time.

His work presents a unique, emblematic view of the state of South Africa today, from the Truth and Reconciliation Commission hearings to traces of apartheid's violence in the landscape around Johannesburg. He does not focus on apartheid in a direct manner, but rather on the contemporary state of his city. As for more direct political issues, his art presents ambiguity, contradictions, uncompleted movements and uncertain endings which all seem like insignificant subtleties but can be attributed to most of the calamity he presents in his work.

In Kentridge?s works, the influence of European art and culture is evident. The influence of satirists like Daumier, Goya and Hogarth is clear, and he also often uses European classical themes as frameworks for contemporary African subjects. Kentridge's fusion of Expressionism, art and theatre finds its context in the interests of South Africa's Resistance Art movement of the 1980s, and his work was largely unknown outside the country until he established an international reputation in the early 1990s.

Kentridge's first film premiered at the Weekly Mail Film Festival in Johannesburg in 1989, and has since been screened at international venues such as the Institute of Contemporary Art, London, the Museum of Modern Art, Oxford, England, the Edinburgh International Film Festival (1993), the Museum of Modern Art in New York, and the Centre Georges Pompidou in Paris. Other festivals screening the series include the Festival International du Film d'Animation, Annecy (1995); Festival du Dessin Anime et du Film d'Animation, Brussels (1996); Culturgest, Lisbon (1996); Internales Trickfilm-Festival, Stuttgart (2000); and the New Zealand Film Festival (2000). According to the Goodman Gallery website, 'Sobriety, Obesity and Growing Old' was selected as one of 84 animated films in the programme Jewels of a Century in 2000. At the Africus Biennale in 1995, Kentridge exhibited multimedia collaborations with Doris Bloom, while also participating in Croc del Sud at the 45th Venice Biennale in the same year. Other exhibitions include the Jurassic Technologies Revenant (1996); the 10th Sydney Biennale; Documenta X (1997) in Kassel, Germany; and Truce: Echoes of Art in an Age of Endless Conclusions (1997) at SITE Santa Fé in New Mexico. Numerous international venues have featured one-person exhibitions by Kentridge since 1998. These include the Museum of Contemporary Art, San Diego, Palais des Beaux-Arts in Brussels, Kunstverein Munchen in Munich (1998), Museu d'Arte Contemporani in Barcelona (1999), and the Serpentine Gallery in London (1999), where the animated film series were shown in various configurations.

Kentridge has won several international prizes for his work, including the Carnegie Prize at the Carnegie International 1999/2000 in Pittsburgh. Other screenings of his animated short films occurred at the Museum for Modern Art in New York, d'APERTutto at the 48th Venice Biennale, the Hirschorn Museum in Washington, and other cities like Chicago, Houston, and Los Angeles in 2001 and 2002.

Copies of the works of William Kentridge can be purchased and rented for exhibition in Video Data Bank.

Are you William Kentridge?