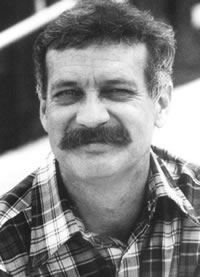 
Will Hindle was a passionate proponent of the "personal" film. The term "personal" meant that the artist was fully responsible for the making of the film: responsible for the subject matter, for the direction and for the choice of images, for the camerawork and for the editing. As such he was one of the pioneers when the short films became a new media in the United States, first known as underground or experimental films.

His films often have a psychological and clearly autobiographical side to them, yet they are a mystery, they are intense and personal.

Despite the extraordinary quality of his films, Will was not a technician - in the sense that his approach to making a film was his own invention. He ignored conventional professional approaches to filmmaking and invented his own machinery and techniques. He worked directly with the film as it came from the camera, the irreplaceable" original" which was liable to dust and scratches or even total destruction as it was handled.

During his life he thought at the University of South Florida
Are you Will Hindle?