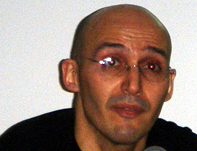 His works include video, photography, performance and literary essays. All, in one way or another, deal with the contemporary history of Lebanon and concentrate on the Lebanese civil wars, the Arab-Israeli conflicts, and documentary theory and practice, with particular emphasis on the wars in Lebanon since 1975 till 1991.

Two series of photographs and a video piece investigate the contemporary history of war in the Middle East. We Decided To Let Them Say "We Are Convinced" Twice. It Was More Convincing This Way, a series of 15 large-scale photographs, is based on the Israeli Army's invasion and siege of Beirut in 1982. That summer, the 15-year-old Raad took photographs of military activity in West Beirut. Recently reprinting the pictures from the original, now degraded negatives, he discovered that the images' unusual discoloration, creases, and holes offered a disturbing but realistic representation of a broken world rendered flat by the series of catastrophes that had befallen it.

In the 1970s, Raad collected bullets and shrapnel in Beirut, carefully documenting the the bullets' colors and photographing the sites of his findings. Lets Be Honest, The Weather Helped (1988) presents Raad's black and white photographs with colored dots placed over the locations of bullet holes. The colors of the dots correspond to the colors of the bullets' tips, which he later learned are codes devised by manufacturing countries to mark their cartridges.

Finally, the video piece We Can Make Rain But No One Came To Ask (2006) imagines a collaboration between a car bomb investigator and a fearless photojournalist, focusing on diagrams, notes, videotapes and photographs produced by the team about a specific detonation in Beirut in 1986.

Raad grapples with the representation of traumatic events of collective historical dimensions and the ways film, video, and photography function as documents of physical and psychological violence. He is writing a history of contemporary events in Lebanon, a seemingly comprehensive essay using video, the Internet, performance, collage, and digital photography, not to mention prose in English, French, and Arabic. Given its scope and the obsessive nature of the cataloguing, it's not surprising that Raad has enlisted help in the form of the Atlas Group, a foundation comprising various individuals and institutions, some of which exist independently of their relationship to Raad and some of which don't. That is, the Atlas Group is real, but some of its components are made from a fictional fabric.

Raad founded the Atlas Group, an imaginary foundation whose objective is to research and document Lebanon's contemporary history. Raad presents the Atlas Group primarily through lectures that include films, photography exhibitions, videos, and a variety of documents from the group's archives. More recently, certain sections of the archive have been the object of a number of installations in museum spaces. The Atlas Group's archives include a variety of different materials; notebooks, films, videotapes, and photographs, that are situated between the false binary of fiction and non-fiction; some of the archived documents are real and others invented. among them notebooks belonging to the Lebanese historian Fadl Fakhouri, videos of the former hostage Souheil Bachar and of Zainab Hilwé, the victim of a car bombing, as well as a number of anonymous documents. The aim is to compose an archive of a fictional nature that both criticizes the feigned objectivity of historical discourse and dismantles the supposed autonomy of artistic work. In this project the authenticity of photographic and video documents in the "archive" are queried leaving the viewer uncertain as to how history can be told and visually represented. Appearing to be based on one person?s memories, it also draws on cultural fantasies constructed from the material of the collective memory.

I Was Overcome By A Momentary Panic At The Thought That They Might Be Right: Documents From The Nassar Files in The Atlas Group Archive is part of The Atlas Group's ambitious project that documents the use of the car bomb in the Lebanese wars of 1975-1991. Used by militias across the political spectrum, the car bomb, beyond functioning as a weapon, is seen as a technology, an event, and most significantly a discourse that has determined, and continues to affect, all aspects of public life in Lebanon during the past thirty years, right up to the present moment.

Two pieces by Walid Raad investigate the possibilities and limits of writing history: Dead Weight of a Quarrel Hangs (1999) and Hostage: The Bachar Tapes (2001). Both works do not document history but rather explore what can appear as rational, mentionable, and thinkable about the Lebanese Civil Wars. Hostage offers the "testimony" of Souheil Bachar, who recounts the social and sexual aspects of his detention with American hostages in Lebanon in the 1980s.

The Dead Weight of a Quarrel Hangs is a three-part video project: Missing Lebanese Wars (in three parts), Secrets in the Open Sea and Miraculous Beginnings (in two parts). The work investigates the possibilities and limits of writing a history of the Lebanese wars (1975-1991). All parts are short fake documentaries, hysterical symptoms of sorts that present imaginary events conctructed out of innocent and everyday material. The tapes document fantastic situations that beset a number of individuals during the civil wars. The tapes do not document what happened, but what can be imagined, what can be said, what can be taken for granted, what can appear as rational, sayable, and thinkable about the wars.

His current projects include a book about his 20-year photographic project of Beirut titled Sweet Talk, and a series of seminars and essays about the writer and artist Jalal Toufic.

Raad is also a founding member of the Arab Image Foundation, a foundation started in 1996 to promote historical research of the visual culture of the Arab world, and to promote experimental video production in the region.

Walid Raad has been awarded the Deutsche Börse Photography Prize for 2007 and is a Winner of the 2007 Alpert Award for Visual Arts from the Herb Alpert Foundation. His critical essays have been published in Public Culture, Rethinking Marxism and Third Text, and his media works have been shown at numerous festivals in Europe, the Middle East, and North America. His video and photography works have been exhibited widely in the US, Canada, Western Europe and the Middle East including the 2002 Whitney Biennal and Documenta11.

Copies of the works of Walid Raad can be purchased and rented for exhibition in Video Data Bank.
Are you Walid Raad?