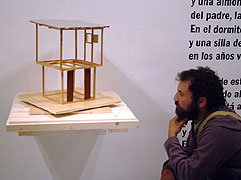 
Armajani is an Iranian born Sculptor and Architect. He moved to the USA in 1960 where he studied at Malcaster College, St. Pauls, Minnesota. His participation in the early seventies in various conceptual art groups led him to explore building types such as houses and bridges. Later in the seventies he broadened his ideas to include various types of communal spaces, as well as a series of objects that he called his Dictionary for Building. Armajani has since used these explorations as the basis for temporary and permanent exhibitions and installations.

Backdoor-Frontdoor, an example taken from this series, is a structure which highlights Armajani´s loyalty to public and social ideals. He created two doors, objects which allow us to both access the joys and rights of our society and escape the less positive aspects of daily life. Yet, upon a closer look, we see that these doors have no handles or knobs and that they are immobile. We are not able to get either in or out and as a symbolic gesture of communication, these doors say a lot about the artist's ideas about the modern world. We do not know who is inside and who is outside, we do not know who exactly has access to which rights. Making suggestions and provoking thought is a common trait in Armajani's work, it is as if he wants to constantly inform us of his desires for dialogue and communication to be freer and more liberal within today's society.

As an architect, Armajani has designed many important and beautiful structures such as the Olympic Torch over the 1996 Olympic summer games in Atlanta, Georgia, USA, the New York and Staten Island tower and bridge (1996) and the Irene Hixon Whitney Bridge in Minneapolis, Minnesota, USA.

However, perhaps his most significant yet controversial work, is his 2005 piece Fallujah. This is seen as a modern day take on Picasso's Guernica, showing the atrocities of the war in Iraq. The piece is an enormous scale structure which depicts the bombardment of the Iraqi city of Fallujah, in which 6000 innocent civilians were killed. The portrayal of the critical moment in which civilians tried to defend themselves against a violent act of discrimination by the American army, echoes Picasso's piece, but Armajani's work is distinctly different. The size of the sculpture is monumental and the chosen materials (wood, glass and found objects) create a sense of immediacy. The fact that the work was censored in the USA shows Armajani's capacity to commit himself to society through his art. Like many of his other works, Fallujah surprises the viewer, enabling them to discover new things about our world, not just politically but also on a personal and intimate level.
Are you Siah Armajani?