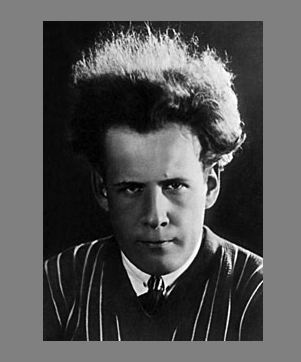 
Russian film director, theorist, writer, editor, producer, art director, production designer, set designer, costume designer, and actor. After studying in 1916-18 at the Institute of Civil Engineering, Eisenstein decided to enter the School of Fine Arts and take on a career in the plastic arts. In 1920 he joined the Proletkult Theatre (Theater of the People) in Moscow. For his first production, The Wise Man, an adaptation of Aleksander Ostrovsky's play, he made his first short film, "Glumov's Diary", which was shown on stage as part of the performance.

Soon afterward he proposed a new cinematic form: the "montage of attractions" - in which arbitrarily chosen images, independent of the main action, would be presented not in chronological sequence but in a way that would create the maximum psychological impact.
He produced his first motion picture, Strike, which portrays the repression of a strike by the army of the Tzar. The movie is dominated by expressionistic camera angles and mirror reflections, and is full of visual metaphors. Eisenstein juxtaposed shots of cows being butchered in a slaughterhouse with workers being mowed down by the army. This was the first manifestation of Eisenstein's bold new cinematic grammar and theory. He edited conflicting shots to achieve the maximum power of persuasion. The effect was remarkably attained, but the true occurrences were falsified.

His next movie was Potemkin (also known as The Battleship Potemkin), ordered by the Central Executive Committee of the newborn U.S.S.R. to commemorate the Revolution of 1905. This film still remains enormously popular and influential among the masterpieces of world cinema. Its greatness lies not only in the essence of the human nature it portrays, its social significance, or in the formal excellence of its rhythm and editing; instead, each of these expands and multiplies the others. The close-ups of suffering human faces and the soldiers' boots in the now legendary "Odessa steps" sequence carried such impact that some screenings of the film outside the country provoked riots, fights with police and uprisings because people were convinced they were watching a newsreel.

Having earned recognition as the "epic poet" of the Soviet cinema, Eisenstein made a film entitled October, which dealt with the shifts of power in the society after the 1917 Revolution, the rise of Lenin, and the struggle between the Bolsheviks and their political and military enemies. The film was sometimes stimulating and inspired, but it was also disparate, anarchical, and often confusing and seemingly random.
Old and New (originally titled The General Line) was also uneven, but better balanced. It was filmed to document the collectivization of the rural countryside for posterity, and took the form of a poetical epic. Calm and solemn, it was the stylistic antithesis Potemkin`s violent and compact structure.

Eisenstein went to Hollywood in 1930, where he was hired by Paramount studios to work on the adaptations of the novels Sutter's Gold, by Blaise Cendrars, and An American Tragedy, by Theodore Dreiser. Refusing to modify his scripts to meet the studio demands, he broke the contract and went to Mexico to direct ¡Qué Viva México!, with capital from the novelist Upton Sinclair. The film was never completed, and Eisenstein was ordered back to the U.S.S.R. After disagreements with Sinclair, some of the negatives were sold, edited and released. In 1939 a fourth version, entitled Time in the Sun, was made from the footages.

Returning to Moscow in 1933, Eisenstein started Bezhin Meadow, but he was ordered to suspend production after it was attacked as "a formalistic manifestation" because of its poetic interpretation of reality and events. Eisenstein suffered from governmental policies toward the arts, but was able to make a film recounting the medieval epic of Alexander Nevsky, in accordance with Stalin's policy of glorifying Russian heroes. This film transfigured the actual historical events, majestically leading to a final resolution that represented the triumph of collectivism. Produced in collaboration with Prokofiev, who wrote the score, the film blended images and music into a single rhythmic unity, an undivided whole.

Eisenstein made an even more ambitious masterpiece, glorifying the psychopathic and murderous Ivan the Terrible, whom Stalin admired. Shot in the Ural Mountains, the first part was finished in 1944; the second two years later. A third part was still under development when Eisenstein passed away from a hemorrhage soon after his 50th birthday.

Eisenstein visited Fritz Lang on the set of Metropolis, where he discussed the advantages of an "unbided", mobile camera with Karl Freund and Gunther Rittau. Metropolis, a vision of a city in the year 2000, inspired Eisenstein to create a film about a glass tower, envisioned as an architectonic image of America. The Glass Tower developed as an architectural project based on two mythologies: one of skyscrapers as hierarchical structures; and one of transparency, bound to the material of glass. Eisenstein saw the film as a response to Metropolis, which presented an emblematic vision of social hierarchy.
Like most of his scripts written in Hollywood, The Glass Tower remained on the drawing board, but, unlike his other abandoned projects, it was not made because he himself stopped working on the script, rather than because of disputes with producers.
The Glass House exists only as a storyboard in Eisenstein's archive in Russia, along with other projects that Eisenstein developed at the end of the 1920's: the making of Karl Marx's Capital, the adaptation of James Joyce's Ulysses, and the writing of a Spherical Book in which he desired to transfigure film theory.

Most critics would agree that Eisenstein's three greatest films stand far above the others, but all of his work is significant; its flaws are common to artists probing the limits of their art. It may be that in the history of motion pictures, no other director has surpassed him in his consciousness of his messages and his mastery of the psychological impact of the image.

Possessed of a dazzling intellect that came from many sources, his eclectic interests were diametrically opposed (from Freud to Mickey Mouse to DaVinci!). But they all served his quest for a definitive new theory of cinema. Having studied the works of Griffith, Lev Kuleshov's editing experiments and Esfir Shub's cutting and re-editing techniques, Eisenstein became convinced that in cinema he could manipulate time and space to create new meanings, especially if the images were not merely linked but dislocated and juxtaposed.
For him, the director should plant in the consciousness of the people the elements that would lead to the ideas he wants to communicate, rather than presenting them outright. He believed that establishing ideas in the viewers´ spiritual state and psychological situation would materialize his concept. These principles guided Eisenstein's entire career from start to end.

In his last completed film, Eisenstein achieved what he had dreamed of since he first saw a Japanese Kabuki troupe on stage: the synthesis of gestures, sounds, costumes and sets into one powerful polyphonic emotion. Often described as the father of editing (an honor he shares with Dziga Vertov), he was certainly the first major theorist of cinema to leave a legacy of writings but very few of produced scripts.

"Not only the result, but the road to it also, is a part of truth. The investigation of truth must itself be true, true investigation is unfolded truth, the disjuncted members of which unite in the result.? - Sergei Mikhaylovich Eisenstein.

- Please check the latest artists from
Are you Sergei Mikhaylovich Eisenstein?