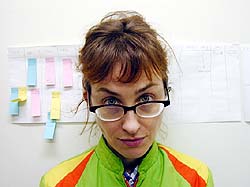 
As part of the experikmental post-punk band Les Reines Prochaines, she starts making their first musical videos, developing an aesthetic language quite close to them through the convination of rock, performance and electronic manipulation.

Rist became famous worldwide with Pickelporno (1992), a work about the female body and the sexual excitation. The fish eye camera moves close to the bodies of a couple. The images are covered by intensive colors, to be perceived strangely, sensually, and ambiguously by the spectator. Pickelporno is an 'anti-pornography' that shows how to address the topic of eroticism with grace and style, and to present it in a way that is aesthetically challenging whilst ensuring that neither image nor imagination descend into the vulgar realm of virile obscenity.

Rist has also developed installations such as Flying Room (1995) and Himalaya's Sister's Living Room (2000), in which video cameras and monitors are wittily deployed in furnished gallery spaces. In 1997, Rist received a Premio 2000 award at the Venice Biennale for the video Ever Is Over All (1997), that shows in slow-motion a young woman that smashes tropical flower in the glasses of parked cars. A policewoman narrows her and greets her. The clip has been purchased by the Museum of Modern Art of New York City.

Three years later, with Open My Glade (2000), commissioned by the New York Public Art Fund, the artist broadcast a series of sixteen one-minute video segments on the largest video screen in Times Square in New York. Interspersed with television programming, this collection of short videos consisted of close-up shots of her face as she uttered poetic, philosophical, and political statements.

In the multi-channel video installation Stir Heart, Rinse Heart (2003), commissioned by the San Francisco Museum of Modern Art, a group of found plastic objects - including egg cartons, clear tubes, and coffee cup lids - hang from the ceiling, acting as mini animated screens catching projected images of waves and what seems to be magnified blood, all in saturated colors.

She teaches at the University of California/Los Angeles (UCLA).

Copies of the works of Pipilotti Rist can be purchased and rented for exhibition in EAI, Video Data Bank.
Are you Pipilotti Rist?