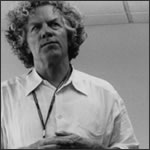 
Peter Hutton has made more than twenty films, most of which are portraits of cities or landscapes around the world. He is known for his silent cinematic portraits of cities and landscapes. Hutton studied painting, sculpture and film at the San Francisco Art Institute. He has taught filmmaking at Hampshire College, Harvard University and Bard College, where he has served as the director of the Film and Electronic Arts Program since 1985. He is the recipient of numerous awards including the Guggenheim fellowship and a grant from the National Endowment for the Arts.
Are you Peter Hutton?