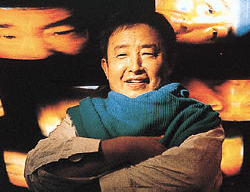 
No artist has had a greater influence in imagining and realizing the artistic potential of video and television than Nam June Paik. Regarded as the 'father of video art', Nam June Paik, American of Korean descent, is widely recognized for his pioneering work in the application of video and new media as an artistic platform.Through a vast array of installations, videotapes, global television productions, films, and performances, Paik has reshaped our perceptions of the temporal image in contemporary art.

The historical background of Nam June Paik affected the way he produces his art. He found interest with music when he received his first piano at age fourteen. Paik studied music and art history at the University of Tokyo, producing a thesis on Arnold Schoenberg, and graduated in 1956 with a degree in aesthetics. Paik's studies continued in Germany at the Universities of Munich and Cologne, and the Conservatory of Music in Freiburg.

Paik began working in music and performance while a student in Germany, where he got involved with the post neo-Dada art movement, Fluxus. After meeting the founder George Maciunas in 1961.

During this time in Germany (1958-1963) Paik collaborated with such artists as Wolf Vostell and Joseph Beuys. There he also met John Cage, who had a tremendous influence on his work, and Karlheinz Stockhausen. Both composers, Stockhausen and Cage influenced Paik through their ideas of composition and performance inspired him into electronic art. Paik worked with Stockhausen at the WDR Studio for Electronic Music in Cologne and this was the turning point of his life where he mixed and experimented with music and art.

He made his big debut at his first one-man exhibition known as, Exposition of Music-Electronic Television (1963), at the Galerie Parnass Wuppertal in West Germany, which featured his series of "altered" TV sets and in which he scattered televisions everywhere, and used magnets to alter or distort their images.

In 1964, Paik moved to New York, where he discovered the Sony Portapak (the first portable video recording device) and video art. In New York, Paik began a longtime collaboration with cellist Charlotte Moorman they worked together in several pieces such as; Opera Sextronique (1967), in which Moorman was arrested for going topless while performing, the TV Bra for Living Sculpture (1969) in which Moorman wore a bra with small TV screens over her breasts, and TV Cello (1971) in which the pair stacked televisions on top one another, in a shape of an actual cello, and when Moorman drew her bow across the "cello" images of both her playing, and images of other cellists playing appeared on the screens. Paik was also known for making robots out of television sets, which were constructed using pieces of wire, metal, parts from radio and television sets. He also caused a sensation in New York when he had a robot cross the road and let it be run over by a car. His first one-person exhibition in New York was at the Bonino Gallery in 1966.

Paik returned to Japan to conduct experiments with electromagnets and color television alongside with electronics engineer Shuya Abe. He then found interest in new technology. By studying and experimenting with technology, he used it as another ingredient in his art. The way technology has advanced in the world and the issues that arise from it inspire him to create most of his work.

Paik's early works display the signature image manipulations and colorizations of the Paik/Abe Synthesizer, a device he developed in 1969 with Abe at the New Television Workshop at WGBH in Boston. In the same year of 1969, Paik participated in the landmark exhibition TV as a Creative Medium at the Howard Wise Gallery in New York.

In the 1970s, he works at WNET's TV lab, New York . In 1973, in collaboration with John J. Godfrey, he makes Global Groove. In this large-scale installation with "Video Walls" made of TV screens, the viewer is confronted by a visual flood of alienated TV images and video sequences. Step dancers accompanied by rock music, Pepsi commercials, drumming Navajo Indians, psychedelic eddies of color, Richard Nixon's grotesquely distorted face, material from current affairs programs, game shows, soap operas. With a strong "neo- Dada" background, he breaks into television methodology and inner lenguage in order to criticize and evidence it.

"Television has attacked us all life long - now we're fighting back"

Many of his tapes were produced in the 1970s, while he was artist-in-residence at the Television Laboratory at WNET/Thirteen in New York.

Paik is perhaps most widely recognized for his prodigious body of video installations and sculptures, from the landmark works of the 1970s, including TV Buddha (1974), TV Garden (1974-78), and Fish Flies on Sky (1975), to the 1986 Family of Robot and the 1995 Megatron.
TV Garden for example is a scene or assemblage that represents nature and technology. It is the first large art piece, which uses state-of-the-art equipment. Monitors are placed lying on their backs with tropical plants surrounding the monitors. On every screen a scene from Global Groove is played. The voice-over in the introduction by Russel Connor explains the message. It states "This is a view of a new world, in which it will be possible to switch on any television program on the planet, and in which TV-program guides will be thicker than the Manhattan telephone book".

Bye Bye Kipling is a tape that mixed live events from Seoul, South Korea, Tokyo, Japan and New York. Two years later, in 1988 he further showed his love for his home with a piece called The More The Better, a giant tower made entirely of one thousand three monitors for the Olympic Games being held at Seoul

Another piece, Electronic Superhighway: Continental U.S., Alaska, Hawaii (1995), which is on permanent display at the Lincoln Gallery of the Smithsonian American Art Museum, is a stunning example of his exceptional vision and unique interpretation of cultural criticism. With this piece, Paik offers up an unsettling commentary about an American culture obsessed with television and the moving image. Electronic Superhighway offers an eerie foresight into our video-obsessed culture, and confronts us directly with our modern malady. Paik developed the idea of an this work as early as 1974 in his text "Media Planning for the Postindustrial Society".

In addition to his pioneering work as an artist, performer, and inventor, one of Paik's major contributions to the field was his early effort as an advocate for the medium, consulting with the Rockefeller Foundation and the New York State Council on the Arts to establish funding systems which would sustain the video movement throughout the decade.

After suffering a stroke in 1996, Nam June Paik was bound to a wheelchair; yet, his creativity remained unbroken ? he turned his artistic ideas into reality with the help of assistants. Nam June Paik died on 29 January 2006, aged 73.

Copies of the works of Nam June Paik can be purchased and rented for exhibition in EAI, Video Data Bank.
Are you Nam June Paik?