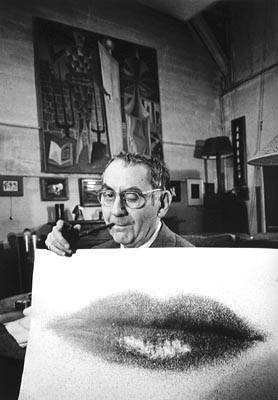 
Man Ray was born Emmanuel Radinski in Philadelphia. Photographer, painter, constructer of objects, philosopher and filmmaker; the only American to play a major role in both the Dada and Surrealist movements.

The son of an artist and photographer, he grew up in New York City, where he studied architecture, engineering, and art, and became a painter. As early as 1911, he took up the pseudonym of Man Ray. As a young man, he was a regular visitor to Alfred Stieglitz's "291" gallery, where he was exposed to current art trends and earned an early appreciation for photography. Man Ray was inspired by the Armory Show in 1913, after which he began painting in a Cubist style. Through Stieglitz, he met Marcel Duchamp in 1915, immediately responded to his ideas, and became one of the most active members of the avant-garde group in New York during the war years. He moved from painting to photography. In 1917 he founded the New York Dada movement with Duchamp and Picabia and began to produce ready-made, commercially manufactured objects that he designated as works of art. His most famous object is generally regarded as The Gift, a flatiron with a row of nails sticking out of it and a row of tacks glued to the bottom.

In 1921 Man Ray settled in Paris and became associated with the Parisian Dada and Surrealist circles of artists and writers. Inspired by the liberation these groups promoted, he experimented with many media. He started to develop the photographic technique of the rayograph: rediscovering how to make "cameraless" pictures, or photograms, by making black-and-white images without a camera on photo-sensitive paper. He made them by placing objects directly on the paper, which he exposed to light and developed. In 1922, a book of his selected "rayographs", Les Champs délicieux (The Delightful Fields), was published, with an introduction, focusing on the enigmatic quality of Man Ray's images, by the influential Dada artist Tristan Tzara. Later Man Ray also experimented with the technique called solarization, which renders part of a photographic image negative and part positive by exposing a print or negative to a flash of light during development. He was one of the first artists to use the process, known since the 1840's, for aesthetic purposes.

Man Ray also pursued fashion and portrait photography and made photographed the celebrities of Parisian cultural life. Many of his photographs were published in Harper's Bazaar, Vu, and Vogue. He continued his experiments with photography through the genre of portraiture; for example, he gave one sitter three pairs of eyes, and in Violon d'Ingres he photographically superimposed sound holes, or f holes, onto the photograph of the back of a female nude, making the woman's body resemble that of a violin. He also continued to produce ready-mades. Another famous creation, a metronome with a photograph of an eye fixed to the pendulum was called "Object to Be Destroyed" - which it was by anti-Dada rioters in late 1950's.

Man Ray also made films. In Le Retour à la raison (Return to Reason), he applied the rayograph technique to motion-picture film, making patterns with salt, pepper, tacks, or pins. Some of his other known films include Anémic cinéma (in collaboration with Duchamp) and L'Étoile de mer (Star of the Sea), which is considered a Surrealist classic.

In 1940 Man Ray escaped the German occupation of Paris by moving to Los Angeles. The "Hollywood" years proved prodigious in many ways. Expansive in his interests and inventive of spirit, he created an impressive number of photographs and objects, as well as paintings and drawings, many of which depicted mathematical equations. He often integrated mathematical and geometrical forms with human proportions, such as found in T-Square. In the 1948 exhibition at the Copley Galleries, these "Objects of My Affection," as the artist called them, were notable examples of the crossover between popular culture and high art in Los Angeles, a form of "pre-pop art". During this decade he commercially produced many photographic albums and some geometric chess sets.

He came back to Paris in 1951 where he continued to paint and experiment until his death.

"An original is a creation motivated by desire. Any reproduction of an original is motivated by necessity. It is marvelous that we are the only species that creates gratuitous forms. To create is divine, to reproduce is human." - Man Ray -

When one thinks of Surrealist film it is usually Bunuel and Dali's Chien Andalou or L'Age d'Or that comes to mind. But preceding their work by several years were some extraordinary films by Man Ray.

His films are full of interplays of strange light, bizarre and dark images of insanity, and vital kinetic energy to take the viewer on a brief journey of self-discovery to the familiar territory of desire
A recurrent theme in Man Ray's films (and indeed surrealist art in general at that time) is the relationship between dreams and desire. Freudian notions about the subconscious shaping our conscious thoughts and acts would easily be discerned in much of surrealist art in the 1920s.
It is no surprise that Man Ray's films have the character of a hazy dream, with strong sexual undertones, sometimes transposing the conscious sensual experiences into a chaotic, revolving morass of abstract thoughts. Two worlds inextricably intertwined and forever inter-dependent, the physical world of corporeal pleasures, and the inner world of the mind.
For him, the use of films could subvert the dominant realist conventions of narrative cinema, exploiting the technical possibilities of the camera for disruptive aesthetics and the depiction of dream and desire.
Ray stated his works of art were "designed to amuse, annoy, bewilder, mystify and inspire reflection." This flair for the unconventional and unexpected is reflected in an exhibit that substantially spans his art making career. His works define the impact of experimental film by artists on mainstream culture, and on the legacy of the "avant-garde".

It has never been my object to record my dreams, just the determination to realise them. - Man Ray -

- Please check the latest artists from
Are you Man Ray?