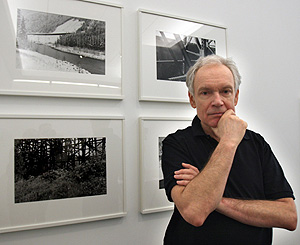 
Baumgarten has worked with installation, photography, sculpture and film. He has a local and contextual approach to his work which allows him to analyse and interpret cultural phenomena in a way which surprises the viewer.

He represented Germany at the 1984 Venice Biennale , where his work consisted of the names of Amazonian peoples engraved into a marble floor and filled with resin. He has since exhibited this same style of Land Art in galleries suuch as the Tate . Baumgarten lived among the Yanomami Indians in the Amazonian jungle for sustained periods between 1978 and 1980 and this experience influenced his work in an obvious manner. His ideas on ecological, colonial and anthropological themes are presented profoundly in his pieces. On a number of ocassions he has sought to portray the impact of European invaders on South American areas and in both his photography and installations he uses light and natural materials to represent conflicting peoples and the Western perception of Tribal life.

In describing his unique form and style he states "My work is not a question of strategy or mode of opinion. Rather it is based on principles, guided by intuition. Measurement and proportion are the instruments of my thought and, a grammar which reflects the elementary spatial relationships and a rational sense of timing and emphasis are fundamental to my artistic practice. It is about the sensual qualities embedded in the body of space, its materialization and form. My work is not about installation or concept arts: it is art that does not ignore its architectural context. The work takes material form by integrating given structures into a complex whole and by creating a canon of references among individual, site-specific elements. This dynamic is a dialectic in which a critical discourse with contemporary culture unfolds within an architectural framework. The content becomes the form. My critical approach does not intend to offer autobiographical solutions to universal problems. I believe art should encourage us to question the status quo and the structures that allow it to persist."
Are you Lothar Baumgarten?