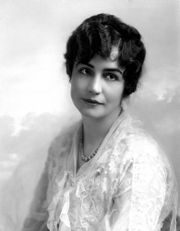 Lois Weber was an American silent film actor, producer and director, and was the first woman to direct a full-length feature film when she directed The Merchant of Venice in 1914. She started to pursuit her artistic dream at an early age. She was an excellent pianist and a good singer. Later she became an actress and joined the Gaumont Film Company, one year later she marriedGaumont manager Phillips Stanley.

In 1908 she got a role in a movie she has written called Hypocrites, same title as her 1915 film which she wrote, directed, produced and starred in.

The majority of her film were loaded with social themes and moral lessons considered daring for that time and because of this her film were very successful at the box office.

In 1916 she became Universal Studios highest-paid director, and in 1917 she formed her own production company, Lois Weber Productions.

In the 1920s her fortunes began to change : she lost her company, obtained a divorce from the abusive, alcoholic Smalley in 1922, and had a nervous breakdown. She married Harry Gantz in 1926, but they divorced in 1935. Her last silent films were Sensation Seekers and The Angel of Broadway (both 1927). Weber's final film was White Heat (1934), a tale of miscegenation on a sugar plantation. White Heat was poorly received, and she could later only find work as a script doctor for Universal. She died, penniless, at age 58.

For her contribution to the motion picture industry, Lois Weber has a star on the Hollywood Walk of Fame at 6518 Hollywood Blvd.

Are you Lois Weber?