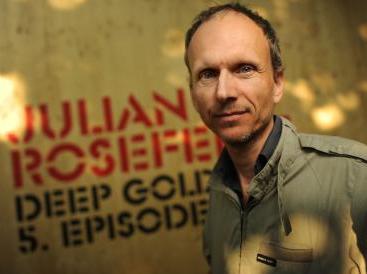 
Julian Rosefeldt studied architecture in Munich and Barcelona. After receiving his diploma in 1994, he began working in collaboration with fellow Munich graduate Piero Steinle. Since 1999 he has worked independently.

Rosefeldt’s work consists primarily of elaborate, visually opulent film and video installations. In most cases, these installations are shown as panoramic multi-channel projections. They range in style from documentary to theatrical narrative. In Lonely Planet (2006), for example, the artist portrays a hippie-ish Western backpacker on a trip through India; as he moves through a series of clichéd sequences, including a frenetic Bollywood-inspired dance number, the camera periodically pulls back to reveal spotlights, dressing rooms and other filmmaking necessities. Rosefeldt primarily uses 16-mm and 35-mm film and has often worked in close cooperation with the cinematographer Christoph Krauss. He also works in the medium of photography.

Rosefeldt has lived and worked in Berlin since 1999, when he relocated as Artist in Residence at the Sammlung Hoffmann. In addition to his art production, Rosefeldt also works with the Schaubühne am Lehniner Platz, often collaborating with its head and creative director Thomas Ostermeier. In 2009, Rosefeldt was invited as a guest professor by the Media Art and Media Design faculty at the Bauhaus-Universität Weimar. Since 2010, Rosefeldt has been a member of the Bayerischen Akademie der Schönen Künste in the division of Film and Media Art. Since 2011 he has been professor at the Akademie der Bildenden Künste in Munich.

Are you Julian Rosefeldt?