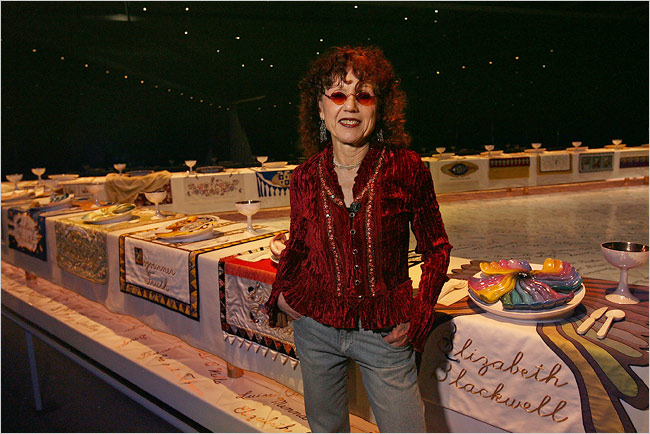 
Judy Chicago is an artist, author, feminist, educator, and intellectual whose career now spans four decades. Her influence both within and beyond the art community is attested to by her inclusion in hundreds of publications throughout the world. Her art has been frequently exhibited in the United States as well as in Canada, Europe, Asia, Australia, and New Zealand. In addition, a number of the books she has authored have been published in foreign editions, bringing her art and philosophy to thousands of readers worldwide. In the early seventies after a decade of professional art practice, Chicago pioneered Feminist Art and art education through a unique program for women at California State University, Fresno, a pedagogical approach that she has continued to develop over the years. She then brought her program to Cal-Arts, where she team-taught with Miriam Schapiro, producing with their students the ground-breaking Womanhouse project. In 2009, California State University, Fresno hosted an exhibition entitled "A Studio of Their Own: The Legacy of the Fresno Feminist Experiment" in which the work of the very first Feminist Art program students, with whom Chicago worked closely, was showcased. In 1974, Chicago turned her attention to the subject of women's history to create her most well-known work, The Dinner Party, which was executed between 1974 and 1979 with the participation of hundreds of volunteers. This monumental multimedia project, a symbolic history of women in Western Civilization, has been seen by more than one million viewers during its sixteen exhibitions held at venues spanning six countries.The Dinner Party has been the subject of countless articles and art history texts and is included in innumerable publications in diverse fields. The impact of The Dinner Party was examined in the 1996 exhibition, Sexual Politics: Judy Chicago's Dinner Party in Feminist Art History. Curated by Dr. Amelia Jones at the UCLA Armand Hammer Museum, this show was accompanied by an extensive catalog published by the University of California Press. In 2007, The Dinner Party was permanently housed at the Brooklyn Museum as the center piece of the Elizabeth A. Sackler Center for Feminist Art, there by achieving Chicago's long-held goal. In conjunction with the permanent housing, Chicago published a final updated and definitive book about The Dinner Party: From Creation to Preservation (Merrell, 2007). http://en.wikipedia.org/wiki/The_Dinner_Party

From 1980 to 1985, Chicago worked on the Birth Project. Having observed an absence of iconography about the subject of birth in Western art, Chicago designed a series of birth and creation images for needlework which were executed under her supervision by 150 skilled needle workers around the country. The Birth Project, exhibited in more than 100 venues, employed the collaborative methods and a similar merging of concept and media that characterized The Dinner Party. Exhibition units from the Birth Project can be seen in numerous public collections around the country including the Albuquerque Museum where the core collection of the Birth Project has been placed to be made available for exhibition and study.While completing the Birth Project, Chicago also focused on individual studio work to create Powerplay. The thought processes involved in Powerplay, the artist's long concern with issues of power and powerlessness, and a growing interest in her Jewish heritage led Chicago to her next body of art. The Holocaust Project: From Darkness Into Light, which premiered in October 1993 at the Spertus Museum in Chicago, traveled to museums around the United States until 2002, and selections from the project continue to be exhibited. Resolutions: A Stitch in Time was Judy Chicago's last collaborative project. Begun in 1994 with skilled needle workers with whom she had worked for many years, Resolutions combines painting and needlework in a series of exquisitely crafted and inspiring images which - with an eye to the future - playfully reinterpret traditional adages and proverbs. The exhibition opened in June 2000 at the Museum of Art and Design, New York, NY, and was toured to seven venues around the United States and Canada. For many decades, Chicago has produced works on paper, both monumental and intimate. In addition to a life of prodigious art making, Chicago is the author of numerous books: "Through the Flower: My Struggle as a Woman Artist", 1975; "The Dinner Party: A Symbol of Our Heritage", 1979; "Embroidering Our Heritage: The Dinner Party Needlework", 1980; The "Birth Project", 1985; "Holocaust Project: From Darkness into Light", 1993; "The Dinner Party"/Judy Chicago, 1996; "Beyond the Flower: The Autobiography of a Feminist Artist", 1996; "Fragments from the Delta of Venus", 2004 and "Kitty City: A Feline Book of Hours", 2005 (Harper Design International). She published a final book on "The Dinner Party: From Creation to Preservation", 2007 in conjunction with the permanent housing of this icon of twentieth century art, now featured in Janson's "A Basic History of Western Art". In 1999, Chicago published a book (coauthored with Edward Lucie-Smith, the well-known British art writer). "Women and Art: Contested Territory" examines images of women by both male and female artists throughout history. In the spring of 2000, "Judy Chicago: An American Vision", a richly illustrated monograph about Chicago's career by Edward Lucie-Smith, was published. This book provided the first comprehensive assessment of Chicago's body of art. In 2010, her book on Frida Kahlo (co-authored by British art historian, Frances Borzello) will be published. Judy Chicago has remained steadfast in her commitment to the power of art as a vehicle for intellectual transformation and social change and to women's right to engage in the highest level of art production. As a result, she has become a symbol for people everywhere, known and respected as an artist, writer, teacher, and humanist whose work and life are models for an enlarged definition of art, an expanded role for the artist, and women's right to freedom of expression.

Are you Judy Chicago?