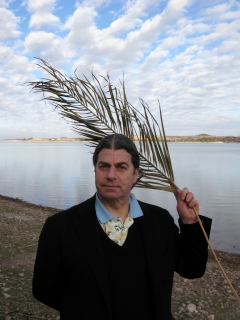 
Armleder has worked with performance, installations, paintings, wall paintings and sculpture. He is a part of the Fluxus artistic philosophy and is the founder of the Groupe Ecart, a movement which was particularly significant in the 70s and 80s. He states, "Ecart originally is the fallout of some of my friends from school. We were 12 years old at the time. School friends which were not related to art in any way. On one hand we were in a rowing team and doing trips and things like that. On the other, we were going to see John Cage concerts. Because I had this fascination for that, for what I don't know. A bit later on I decided that I would get involved in art and get my friends involved in art, although they were not artists. So the Ecart group at the beginning was a group of friends and that goes back to the mid 60s, as a matter of fact. It was in 69, that we got this name Ecart, we found this name for the happening festival. By then I was very interested and close to and had contacts with Fluxus artists. So we did a series of happenings, some of them based on John Cage scripts. Others were related to Fluxus and other improvisations in a cellar in Geneva."

His work has varied throughout the years and as an artist who is full of improvisation and who leaves the results of his final pieces to chance, his style is truly individual and influential. This individuality led him to create a new form, something he calls Furniture Sculpture, an artistic style which combines installations and monochrome or abstract paintings, providing a great sense of proximity and juxtaposition for the viewer. This new format earned him an association with the Neo-Geo movement, yet as an artist who refuses to be labeled, he negated this involvement. In both his drawings/paintings and sculptures he takes examples from models such as De Stijl designs, Suprematist compositions and Minimalist patterns, and uses them in order to continue producing his own works. He makes separate objects communicate with each other and converse with the public by placing them in an exhibition environment, bringing up the possibility of an equivalence between them when viewed in such an abstract context.

In 2007 he was commisioned to create a new bag for the popular sports brand PUMA. The result was The Reality Bag, a unique accessory which unites original art works with innovative design. The Serpentine Gallery invited Armleder to develop the new product, leaving him free to create an original style. He also came up with the idea of the content, asking young artists to produce pieces to go inside each of the 1000 Reality Bags. Therefore each product is an individual yet multiple piece containing works by Armleder himself and others who he personally invited such as John Trembley and Philippe Decreuzat.

For an interview with John Armleder about sculpture and paintings see http://www.heyokamagazine.com/HEYOKA.4.SCULPT.JohnArmleder.htm
Are you John Armleder?