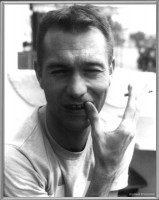 JOHN AND THE FLYING LIZAR MAYBURY


Director, screenwriter and editor, Maybury shot his first films in an around London's punk scene. He is one of the most representative artist of the british underground film movement of the 80s.
Maybury also get involved with pop video world directing clips for artists like Sinnead O' Connor and Boy George and in filmaking with Love is the Devil, study for a portrait for Francis Bacon.
Are you John and the Flying Lizar Maybury?