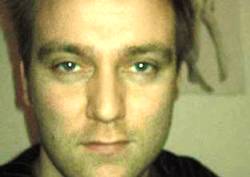 
Jesper Just graduated from the Royal Danish Academy of Fine Arts in 2003 and has already produced an impressive body of work that has received much international recognition. Jesper Just's videos have definitely some very special qualities: ranging from the hypnotic to the shamanic, they present us with a sort of "opiate-like" tinge that never disappears once you engross yourself in them. They make you feel a strong desire to be trapped for ever by such an enjoyable and pervasive power. Just continues an enigmatic exploration of male gender roles and cross-generational relationships between men.

New York's Perry Rubinstein Gallery presents his brand new piece, A Vicious Undertow, a black and white 16mm film transferred to video, which comes out as the most emblematic and rotund video production made by the artist up until now, and one of the most compelling and seductive pieces in the history of video art. Its elegant, classic qualities and cinematic... resources make spectators feel transported to a theatre, where the usual empty dark room becomes one of those theatres of gold-plated wood balconies and red velvet curtains.

The film opens with a moving close-up across some tapestry, and the background sound of song whistled by a woman. The singer then makes her entrance, and takes leading role of the story, which constitutes a reversal statement from the artist's if we take into account that all of his videos thus far feature male main characters.

The narration sets out in the interior of an old house or mansion, where the rest of the characters are introduced within a scene highly charged with physical modes of expression which characterize the artist's films.

The particular solemnity of the stereotyped characters leads us to assign them with a series of clichés, but these purported traits tend to dilute as the characters gain in identity and adopt strong personalities in a constant process of humanization. The stravaganza that underlies the gestures and opera-like style, and an overall control of detail, creates an epic choreography linked to the Greek tragedies and the classic literature. Jesper Just is a master at penetrating the characters' psychology and capturing every nuance of their emotions with a strong charge of melodramatic deepness.

Just's videos resemble climax of a good movie: they have the viewer utterly mesmerized and astonished from its inception, and culminate by way of extremely intense moments, such is the dancing scene here, another recurrent part of his stories.

The Chiaroscuros intensify the scenes dramatics, and an amalgam of baroque elements build up a captivating atmosphere which shifts from the lyric to the grotesque.

As in his previous works, some kind of storyline is suggested in the background, but when the viewer tries to reconstruct the sense or meaning underlying the relations, these, as a whole, acquire a surreal echo. The enigmatic narrative could be included within the classic film noir genre, but it lacks a solid plot - other what the spectator can create in his mind. Therefore, there's no cabal, no resolution, no answer whatsoever.

An elucidated analysis of this work cannot but avoid connecting it with the theories of Deconstructivism and personages like Derrida or Leo Strauss, thus establishing the existence of multiple meanings within the work and some sort of violence emanating between them.

This lack of intrinsic essence that the text conveys, along with the artist's exceptional plasticity and elegant aesthetic sensibility, makes us believe that through Jesper Just's videos there?s hope to still trust the Gesamtkunnstwerk.

... And once you finish watching it, you are left with a non-defined aftertaste, the same one that overcomes the reader after turning the last page of a good book, an overwhelming feeling of loss but fulfillment.

Using the aesthetic, dramaturgic and narrative language of classic Hollywood productions, Just manipulates the visual codes, clichés and idiom of musical comedy, film noir, and melodrama in order to create short films that are sentimental, nostalgic, melancholic, theatrical and filled with Hitchcock-like suspense. His narratives are linear and easy to follow but the action appears to be taken out of a larger context. There is no past and no future, only a cryptic present that remains unexplained and unresolved. Leaving us spellbound, Just trusts us to draw our own conclusions.

Despite his young age Jesper Just's work has been internationally exhibited at some of the most important contemporary art venues, such as the Witte de With (Rotterdam), the Vienna Kunsthalle, the Moore Space (Miami), the Hirschorn Museum (Washington), and the Stedelijk Museum of Amsterdam.
Blanca de la Torre


Are you Jesper Just?