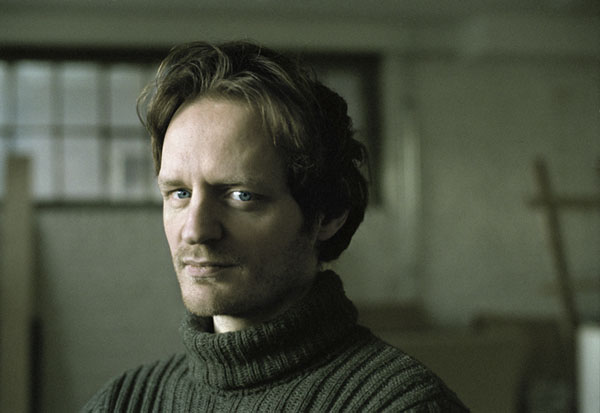 
The multi-disciplinary visual artist Hans Op de Beeck (1969, Belgium) builds and stages contemporary, fictive urban and household locations, situations and characters that seem very familiar to the viewer. These include both lonely spots for reflection and crowded spaces, populated at times by bungling characters who tell us something about the way we live today, the paths we follow and how we attempt-with great ineptitude - to deal with time, space and each other.

In recent years his work has been exhibited on numerous occasions in cities including New York, London, Venice, Basel, Vienna, Shanghai, Paris, Amsterdam and Antwerp. From September 11 through November 16, his most recent installation, the monumental 'Location (6)', will be part of the Singapore Biennale 2008.

THE NEO-ROMANTICISM OF HANS OP DE BEECK
by Catherine Somzé

A larger-than-life white table with white chairs, white cups and cutlery, the whole scenery whitened and still untidy after what seems to have been a coffee and pie meal. At one end of the table lay a couple of ashtrays, dirty and full of fag ends; scattered around, cherry pie leftovers spill sangria red on the immaculate surface. As if frozen in white ash, the ordinary setting of Hans Op de Beeck?s latest installation, Table (1) (2006), reminds one of Pompei. Yet, to truly capture it, one has to proceed to a very special kind of archaeology, one that primarily requires the work of one?s own imagination. According to Op de Beeck?s artistic vision, spectators themselves might well be the real sites of an artistic practice that has as primary subject the epic of contemporary life.

Though white can be associated with a multiplicity of references, Hans op de Beeck chooses his colours and shapes in a way that contributes to the building of a parallel world, the specific logic of which enables viewers to fully believe in the possibility of its existence. The coherence of the whole is crucial to the credibility, hence authenticity, of the piece. Yet, apart from the consequent use of the colour white, its dramatic contrast with the sherry pie red and the yellowish cigarette butts, another element secures the expressive power of the piece: its incomplete or fragmentary dimension. This observation doesn?t concern the finishing of the surfaces and the detailing of each object (Op de Beeck would already deserve a special place among contemporary practitioners for his exquisite craftsmanship alone).

It concerns the impossibility of comprehending the expressive strategy of the piece without involving whom is, in principle, not part of it: the spectator. (S)he is the one who will be able to activate the expressive potential of the work, which constitutes an invitation to wonder endlessly about the variety of gestures that might have lead to the final disposition of the scenery. The piece constitutes the theatre of hypothetical events and emotions without ever hinting at a specific narrative closure. As viewers gaze upon it, it becomes the projection screen of their imaginings and it is through this very process that the art piece covers its actuality. In the same way, one of the defining features of the nineteenth century Romantic Movement is its emphasis on intuition, imagination and feeling. Caspar Friedrich?s famous canvas Der Wanderer über dem Nebelmeer [The Wanderer Above the Sea of Fog, 1818] best illustrates this tendency. Through a composition that blurs the succession of planes so that viewers cannot reconstruct a geometrical perspective, it is the impossibility of seeing and the invitation to imagine (rather than merely ?look?) that secure the impact of the work. Likewise, the expressive strategy of Table (1) lays in what it doesn?t show rather than what it actually displays. This is why it constitutes a machine at producing simulations, rather than a simulation itself.

Another important element that characterizes the artistic endeavour of Hans Op de Beeck in neo-romantic terms is the conceptualization of everyday life and urban environment as sources of Sublime experiences. As Charles Baudelaire wrote in the final essay of his Salon of 1846, ?On the Heroism of Modern Life?: ?The life of our city is rich in poetic and marvellous subjects. We are enveloped and steeped as though in an atmosphere of the marvellous; but we do not notice it.? In Op de Beeck 1996 scale model Location (1), which rocketed him to international fame, a crossroads situated in a deserted landscape intimate both the mechanic autonomy of the city traffic and the paradoxical experience of feeling at home in the middle of nowhere. Just as his scale model of a home interior, Christmas (2006) seems to paradoxically reveal the harsh underbelly of family life, Location (1) stages man-made designs (the highway, the electric cable network, the traffic lights) as signposts of a new sublime. Likewise Location (5) (2004), the life-size reconstruction by memory of a motorway restaurant bridging a lighted road engineered as a trompe-l?oeil, suggests that a highway can be as thrilling to look at as a natural phenomenon. Both in Location (1) and (5), the staging of estrangement invites the viewer to a kind of exalted retreat. Here alienation and the experience of the Sublime meet in their power to provide special access to one?s own self; ordinary life and contemporary urban environments are worthy of being depicted.

The works of Op de Beeck subtly challenge the traditional dichotomies of absence and presence, nature and culture, alienation and self-awareness in ways that engage the imagination in multiple fashions and acknowledge in contemporary settings the source of a new sublime. Likewise, the exquisite finishing, the wealth of details and the overall sophisticated aspect of each of his pieces do not only bespeak Op de Beeck?s interest in the perfect physicality of the works but constitute an essential dimension of their authenticity. For the memories and desires of the viewers themselves constitute the ultimate artistic material on which Op de Beeck relies to create his pieces.

SELECTION OF SOLO-EXHIBITIONS AND PROJECTS

Are you Hans Op de Beeck?