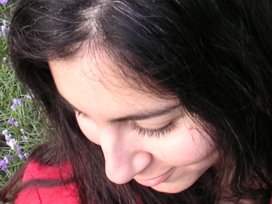 Far from the grandiloquence, so common in Cuban art nowadays, the exhibition 'Realidades Mágicas' (Magical Realities) of the work by artist Glenda León (Havana, 1976) was presented at the Centro de Arte 23 y 12. Her poetry is subtle, her discourse, the recovery of the trivial, the lens focusing, zooming in on the details of existence, that have been ignored once and again, obviated in their apparent irrelevance.

In this occasion Glenda, reemphasized intentions that were previously stated. On one hand, the sense of time, its relationship with the abstract and the minimal, along with the preeminence of conceptualism. This exhibition presented a journey to the center of detail and pondered upon the condition that Marcel Duchamp defined as infra-light. At the same time, there were some ramblings of what, in the sixties, was called new realism, with Yves Klein's posture in particular.

The exhibition had three fundamental parts or narrative lines. The first one, related to what's been taken as abstract, parting from small events or details of daily life, another one where the condition and the primary sense of certain objects was subverted and a third one directed towards the manipulation of reality through the use of video.

Glenda's pieces are usually the kind where you find gesture as protagonist, be it intuitively or consciously, without it being transcendent for the artist to differentiate whether they are part of the natural or the artificial.

One of the lines of 'Realidades Mágicas' illustrated what she has named performances of second degree intensity, in which the creative act exalts the result, obviating the documentation of the process (or processes) and that almost as a rule, have the nature of a life experience. It is here where the three pieces that constituted the series Ideas masticadas (Chewed Ideas) were placed on a first level. For these pieces, she used chewing gum of different colors and for its production some of her friends intervened by chewing the material that was later placed on Bristol board, in one case turned into a line, and in the others spread on the already mentioned support as informal brush strokes.

A second level in relation to what was previously stated, was occupied by the installation Cada forma del tiempo (Every Form of Time). This piece consisted of twenty small squares, where the artist had drawn on adhesive paper, different shapes, randomly manipulated, with the material obtained from her own shedding hair. These hair strands -that are disposable- took a different life and a different time. New senses were open not only in this installation, but also in Hay cosas que nacen de una muerte (There are some things that are born out of death), where a white hair turns into the stem of a flower. These two pieces, referred to, not only a sense of maximum abstraction, but also prefigured the predisposition of the artist to subvert the minimalism of a macro state into a micro functionality and vice versa.

In a different direction, we find the pieces that simulated some archeological work, set up in a way that resembled a section of a museum. The objects were placed in glass cases with complementary texts on the wall (central to the completion of the piece). Each object was intervened in such a way that its primary sense was adulterated, as much as its own life and history, although there was no concealing of the purpose for which these were designed.

Perhaps, the greatest significance of this segment, joined under the title Objetos mágicos encontrados (Found Magical Objects), was found precisely on being a direct allusion, that even today in our country only those who graduate from the art academies are considered visual artists, and those who enter this territory from other disciplines are looked at with mistrust.(1)

Glenda's approach wasn't limited or reduced to this topic; on the contrary, it tried, in a slightly sarcastic way to show us a different way of seeing. Her laboratory of ideas removes the notions that we have of conceptualism, incorporating delicacy, a close relationship with poetry, the feminine, and also a good dose of irony.

Objeto mágico encontrado #3 presented in some urns, a single paintbrush on one side and, on the other, a group of aligned paintbrushes of diverse thickness. Their bristles have been intervened by positioning miniature flowers on their tips, turning them into unusable tools for painting but valuable for their playfulness as well as for their conceptual and poetic twist.

The piece that responded to the title, Objeto mágico encontrado #4 y 5, of lyrical emphasis, indistinctly had as protagonist a typewriter from early Twentieth Century, and a document -a love letter, supposedly- as proof that the first one worked. In the place that occupied every letter in the hammers of the typewriter, tiny flowers of different colors were placed. The letter, that wasn't anything else than an abstraction, had the virtue of confirming some of this diversion found on the text that accompanied the objects and proved the utility of the artifact when turning the letters into petals, words into flowers, and sentences into gardens.

Glenda knows about the cruelty of the world, and her type of abstraction is in no way naïve, or evasive, but is a resource for defense and resistance. Thus her Jardín interior (Inner garden) is in fact, the one that she invented for herself (us), taking what we dispose of, those ties found at the center of feminine under garments, grafted in stems that she later planted on the ground. These ties turn into flowers, after magnifying a detail of the documentation of this gesture, giving value to intimate and insignificant things of reality, which is the material that the artist works with.

The biggest irony was in Alivio temporal (Temporal Relief), a pair of eyeglasses that had in the middle of every spectacle a tiny violet flower. The text that accompanied it recounted how that was, among the objects, the most coveted one, because after using them a radical change in the vision of one's own life and world could be experienced. Glenda offered them as a filter, a resource for survival, a lifesaver.

The artist achieves other immersions in time related to the three videos that completed the exhibition: Cada respiro, Destino y Suspensión (Every breath, Destiny and Suspension). The first two were very well-resolved, but the last video was hindered hindered by the inefficacy of the special effects.

Video allows Glenda a higher level of manipulation of reality. Digital technology makes the fantastic or magic more credible. It was in Cada respiro (Every Breath) where the previous statement was tactically verified. The intense soundtrack emphasized the artist's own breathing rhythm, while the use of a zoom out, starts opening from a flowery landscape (Glenda's dress) until showing us how one of the flowers grows in the span of that same breath. The zoom out uncovers a body on the grass, until this turns into after the precise synchronicity between the vigorous sound of the breath and the displacement of the focal point with which it begun multiple out-of-focus life experiences, each one offering a new and at the same time larger landscape. This video, of exacerbated lyricism, is a piece that does not move in the conventional sense, but instead elapses through time.

Even though simplicity and sobriety distinguish this artist's discourse which is not removed from the poetic text, the literary component and the feminine gift it should not be confused with naïveté, nor can it can be taken as a gesture to conceal reality. On the contrary, her approach is a liberating one, free of prejudice, and plural, always insisting that there is (are) another (other) way (ways) of seeing. This is her shield, her talisman, as it argues a position that questions certain notions of what is taken as a work of art.

There is a lot of suspicion in what she did and said (even in her silences). In the recreated atmosphere one could sense that, in some way, she occupied a territory that is the result of an intellectual cleansing. In the text that she erects by prodding at the spaces, without differentiating the value between natural and man-made, between text and action, what is really important to her is what happens in their interaction, her life experience. Her process, performative, without a doubt, makes us recur to Octavio Paz's idea: The artist is not a doer; his works are not deeds but acts. (2)

Glenda León participated a little over a year ago in the singular experiences that constituted the actions of the Galería DUPP (Desde Una Pragmática Pedagógica) (From a pedagogic pragmatic), a project of René Francisco Rodríguez, artist and professor of the Instituto Superior de Arte(ISA) . She belonged to the list of those that were part of this ?gallery? when in 2001 it was awarded the UNESCO Prize for the fomentation of the arts.

She is one of the artists that represents Cuba in the VIII Havana Biennial. Those who have followed Glenda's tracks -her overly chewed ideas- recognize that she has gradually shown one of her fundamental premises: It is necessary first to discover the most immediate reality. Then will know how to experiment with other realities.

2002
Up Front and Personal Residency, Banff Centre for the Arts, Alberta, Canada.

PUBLIC INTERVENTIONS
2004
Esperanza (out of season), Parc du Portugal, Montreal
Every Step is a shape of time, Ontario College of Art and Design, Toronto

Are you Glenda León?