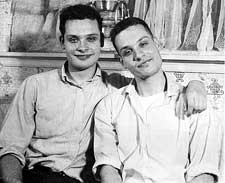 
George Kuchar was born in 1942, in Manhattan. He lived in Bronx since an early age, and started making films in the 1950s, when he and his twin brother Mike received an 8mm camera for their 12th birthday. Their first productions were inspired by the epics they saw on the big screem, and were made at home. George and Mike studied at the Manhattan School of Art and Design, which specialized in training for commercial art. The brothers were pioneers wiyh Andy Warhol, Kenneth Anger, and Stan Brackage in the exciting New York Underground film scene. After his 1980s transition to the video medium, he remained a master of genre manipulation and Subversion. A survey of film themes over the decades reveals recurrent themes of storm chasing in Oklahoma, alien abduction, the seedy side of Hollywood glamour and digestional upsets of epic proportions. If one looks a little closer themes of loneliness and self doubt often appear, but always veiled in campy parody. George has taught film production at The San Franciso Art Institute for over thirty years. In 1992, received the prestigious Maya Deren Award for Independent Film and Video Artists from the American Film Institute. He teaches at the San Francisco Art Institute, where he makes many of his tapes in collaboration with his students.
Are you George Kuchar?