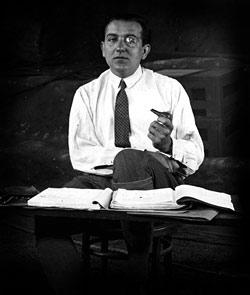 The son of an architect, Lang briefly studied architecture at Vienna's Technical University, then traveled widely before settling for a time in Paris as a painter. While recovering from wounds suffered in the service of Austria during World War I, he started to write screenplays, and after the war he went to Berlin to work with Erich Pommer, a German film producer. Many of the scripts he wrote in the 1920s were co-written by his wife, Thea Von Harbou.

His first successful picture as a director was Between Worlds. Next he made Dr. Mabuse, a study of a criminal mastermind; Siegfried and Kriemhild's Revenge, released in two parts in the United States and based on the early 13th-century German poem; Metropolis, an Expressionist vision of the future; and M, his most famous German film, explored the compulsion to murder. The Last Will of Dr. Mabuse, in which a madman speaks Nazi philosophy, attracted the attention of Joseph Goebbels, the Nazis´ chief propagandist. It is rumoured that after seeing the film, Goebbels invited Lang to supervise German films; Lang left for Paris the same evening, and later moved to the United States. By 1936 he was in Hollywood, where he directed films for twenty years. After Lang's experiences with Nazi oppression he became a staunch anti-Nazi and anti-Fascist.
His most praised American film is Fury, a study of a lynch mob and social injustice. He also directed westerns and psychological mysteries, until conflicts with producers and the necessity for creative compromises led to his departure from Hollywood. He directed films in India until 1959 when he returned to Germany. In 1963 he portrayed himself in the French film Mopris, directed by Jean-Luc Goddard.
Fritz Lang's last two movies are peculiar autobiographies. He remade two earlier films, transforming them into allegorical representations of the intense romantic and political triangle which shaped his early career - between himself, the screenwriter Thea Von Harbou, and the Nazi Party. Although he was not honored by the American film establishment, France, Germany, Austria, and Yugoslavia gave him many awards for his contribution to film from the 1950's through the 1970's. He also received an award for his film M from the German Motion Picture Arts Association in 1931.

Fritz Lang's work is the cinema of the nightmare, the fable, and the philosophical discussion of struggles against destiny, entrapment, violence and paranoiac delusions. Langs' apparent weaknesses stem from his virtues. His characters never develop with any psychological precision, and his world lacks the details of naked truth that are so important to realistic critics; however, Lang's vision of the world is profoundly expressed through visual forms.
As Lang himself observed in an interview with P. Bogdanovich, one of the most important transformations in his work from the German to the American period was a shift in focus from Nietzschean expressionism to depictions of middle class protagonists with a guarded optimism.

Although it was backed by the gigantic, state-operated Ufa studios in Germany, Fritz Lang's visionary silent film Metropolis was partly inspired by a trip he had made to New York, on whose skyline its massive and impressive sets were based. His vision for Metropolis was difficult to translate into film; color, optical, sound and visual effects had not yet been integrated in movies.
Nevertheless, it is an epic projection of a futuristic city; set in urban dystopia, the world is an awkward and disconnected place segregated by class. The working class toils in underground labyrinths beneath the city, while the elites live in luxurious skyscrapers. The film discusses the political themes of capitalism sustained by the suffering of the workers and presided over by heartless masterminds, as well as the dangers of dehumanization in the face of technology.

Metropolis combines ancient pagan and religious motifs in an eclectic mix of imagery and symbolism, most of which is rooted firmly Judeo-Christian theology. The film also examines the themes of sexual rivalry, guilt and grief over a dead woman, all of which is purified in the climactic scene where the false Maria is burned at the stake.
The distinctive set designs of the film are not without ideological implications; they predict the totalizing aesthetic of Nazi Germany, and the movie seems haunted by the Russian Revolution as expressed by Eisenstein's Battleship Potemkin, which opened in Berlin as Metropolis went into production. The workers are a naturally destructive force, and the false Maria can be perceived as Bolshevism personified.
Metropolis blurred the barriers between film and art, and no other movie has so perfectly visualized the industrialization of social relations and the danger of a dehumanized urban proletariat.
Metropolis is timeless, a tormented creation of Fritz Lang's obsessions. The film remains relevant to changing urban societies, in which every new generation will have to face a different Metropolis.

There has perhaps never before been a time so determined as ours in its search for new forms of expression. Fundamental revolutions in painting, sculpture, architecture, and music speak eloquently of the fact that people of today are seeking and finding their own means of lending artistic form to their sentiments. Film has an advantage over all other expressive forms: its freedom from space, time, and place. What makes it richer than the others is its natural expressiveness inherent in its formal means. I maintain that film has barely risen above the first rung on the ladder of its development, and that it will become the more personal, the stronger, and more artistic the sooner it renounces all transmitted or borrowed expressive forms and throws itself into the unlimited possibilities of the purely filmic... (F. Lang, Die Literarische Welt, October 1926)

- Please check the latest artists from
Are you Fritz Lang?