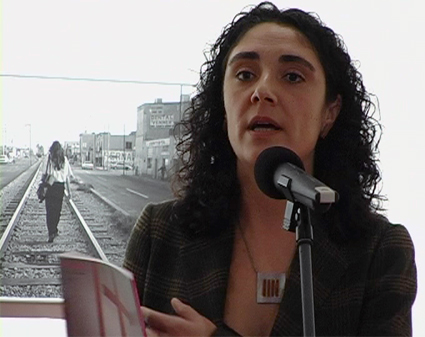 
'I believe Art needs to open the eyes of people. It is a tool of knowledge and claim. I cannot conceive Art without a component of social critic '.

Information, Meditation, Reaction, Reject, Expression, Action, Provocation, Transmission are the links of the chain that shapes my particular modus operandi in the accomplishment of an art work."

Trained as a historian and critic, Eva Sánchez gets in the world of Art from the field of the theory. She observes, she studies, she reflects and she writes on the creation of other artists.

Married for ten years a sculptor, she learns and experiments on the workshop of her companion with diverse techniques. But it is not until the year 2004 that she decides to create what will be her first installation, Estás como el tomate, buena para el chile.

"For me, doing the jump from the theory to the practice was not anything premeditate, but it went out of natural form. Creation is a need. I felt that I had to communicate a situation that it was important for me and I wanted to share with all people. To do an art work is like writing, to make a conference or to curate an exhibition. You have a message that you want to spread and you choose the route that you believe would be more guessed right or with which you feel more comfortable in that moment. Every discipline has its positive component. The moments of voluntary isolation of the writing, the contact with the public who expects to discover or to share affinities, the relation with the artists and to conceive a specific space in the curatorial services. But, in my opinion, what differentiates the accomplishment of an art work to the rest, is its cathartic component."

Eva Sánchez does more than one decade that studies and works on the topic of the gender violence and the labour feminine precariousness. Declared feminist, dedicates her efforts to denouncing certain practices of discrimination to women in different places of the world.

Her first piece, Estás como el tomate, buena para el chile, is a critic on the femicide that is taking place in Latinoamerica from 1993 and, Exit (2007) is a critic to the situation of the aboriginal Australian women.

The main characteristic of her installations is the utilization of a reiterative enough range of colour, the yellow one and the red one, and the contrast among the simplicity of the geometric structures, realized with wood principally, and the organic forms of the natural elements. These elements always evoke to the geographical zone which the piece refers to. For example, in the first one, corn is used, and in the second, branches of eucalyptus.

In the piece Exit she introduces the photography. In the 90s she had dealed studies of camera and lighting, but it is not up to the beginning of 2000 that she begins to experiment and introduces the fixed image, not as an autonomous element but like as a part of her installations.

In 2000 is when also she starts being employed as the field of the image at movement and realices studies of camera and edition. An important base that it will take to her to realize her first piece of video-art.

The essential component that defines her video-art works is the symbiosis that she establishes between the nake body of women and the nature as a route of recovery.

In her first two videoart works -Nuesa, (Nakedness) 2006 and Ferida oberta, (Open wound) 2005- the artist expresses her interior fears which she liberates when she fuses with the nature, at the same time as she identifies with the suffering of a nature increasingly threatened by the destructive intervention of men.

For the accomplishment of this video she captures two cultural referents, the plastic and different literary one. The first one, a ready-made of Duchamp. The second one, a Roberto Bolaño novel, 2666, that takes as a backbone the femicide which besieges Ciudad Juárez. The connection that is established between three actions is the accomplishment of a similar intervenion that there becomes discredited the conventions, the perpetuation of the hierarchies and the universal rules.

The title refers to the first version of the french writer, Charles Perraut, where the conclusion of the story is not equal to that it has come to our days. There does not appear the lumberjack who saves the grandmother and Little Red Ridding Hood, but both are are devoured by the wolf, later that Little Red Ridding Hood and this one they were supporting relations. It is an exemplary punishment, sacrificial, for women who dare to exceed the limits allowes, assigned by a patriarchal society.

Are you Eva Sánchez?