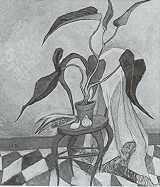 Born in Pennsylvania (United States), 1905
Decease on 1993 in Hollywood


A scholar of French literature and scion of a wealthy Philadelphia family, Emlen Pope Etting was an important member of Philadelphia society, noted in the city for his artistic and social contributions. A driven artist and passionate man, Emlen Etting maintained a long marriage with his wife Gloria, despite the fact that he was homosexual.


He was born in Philadelphia in 1905 and received his education at Harvard University, later studying painting at the Academie Grand Chaumiere with Andre Lhote in Paris, where he socialized with Ernest Hemingway, F. Scott Fitzgerald, and Jean-Paul Sartre. He held several important positions, including as U.S. artist delegate to the Second International Congress of Plastic Arts in Dubrovnik, 1957, and teaching positions at the School of Industrial Art, the Philadelphia Museum of Art, the Philadelphia College of Art, and the Tyler School of Art at Temple University.

Etting was an influential member of the Artists Equity Association, where he served as President from 1955-58), and was also a member of the National Society of Mural painters (WPA influence), the Century Association, the Philadelphia Art Alliance, and the Alliance Francaise. During his lifetime Etting exhibited widely in solo shows and museums across the country, including at the Corcoran Gallery of Art, the Whitney Museum of American Art, the Carnegie Institute, Midtown Galleries (solo), City Art Museum of St. Louis (solo), Butler Art Institute (solo), Akron Art Institute (solo), Dayton Art Institute (solo), Bloomington Artists Association (solo), Illinois Wesleyan University (solo), Audobon Artists, the Carnegie Institute, the Virginia Museum of Fine Arts, the National Academy of Design, and the Pennsylvania Academy of Fine Arts (PAFA 1936-45, 1952-62).

He worked on several important commissions in the City of Philadelphia, and received numerous awards including the Chevalier de Legion d'Honneur award from the French government and the Star of Solidarity from the Italian government.
His paintings hang in the permanent collections of Walter H. Annenberg, the late Helen Hayes, Bernice Wintersteen, Mary Clark Rockefeller and major museums, including the Pennsylvania Academy of Fine Arts, the Addision Gallery of American Art in Andover, Massachusetts, the Atwater Kent Museum, the Philadelphia Museum of Art, and the Whitney Museum of American Art in New York, amongst others.

- Please check the latest artists from
Are you Emlen Pope Etting?