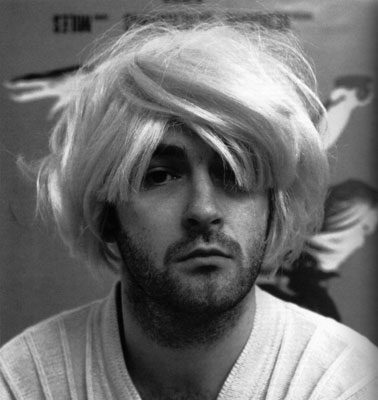 A main figure in the second generation of artists working in audiovisual, his opera has become fundamental in the history of videoart. He works with video, photography, installations, texts and sculpture. Often focused in his own obsessions (the devil, the dual nature of everything, the subconscious...), he masterly reflects on time and memory, darkness and light, recognition and repetition, making the viewer question his or her own perception. His works provoke feelings of anxiety, recognition, and amnesia with respect to the circumstances of the reception of media today.

Some of Gordon's works are related to the films of Alfred Hitchcock. 24 Hour Psycho (1993) is based on Hitchcock's film Psycho, differing in that it lacks sound and is slowed down so that it lasts twenty-four hours. The screen is translucent and the film is projected on both sides of it so that when the spectator approaches the screen, spectators on the other side see them and vice versa, causing a strange interference to a familiar film.
In Feature Film (1999) he reflects on Vertigo, thus drawing attention to the film score and the emotional responses evoked from the viewer. As he says: "We can be attracted to the spectacle of cinema while watching something completely repulsive".

He has also made a film about the football player Zinedine Zidane (Zidane, un portrait du 21e siècle): this video watches Zidane's movement throughout an entire game, and captures him in a multidimensional space, leading the spectator to experience the sensations and movements of the athlete.

Much of Gordon's work is about memory and uses repetition in various forms. In an early work, Meaning and Location (1990), a passage from the Gospel of Luke is given with a comma in different places, thus subtly changing the meaning of the sentence. List of Names (1990-present) is a list of every person the artist has ever met and can remember. One version of this is applied onto the wall of a stairwell in the Scottish National Gallery of Modern Art.

In 2005 he put together an exhibition at the Deutsche Guggenheim Berlin called The Vanity of Allegory. In 2006 there was an exhibition of his at the MoMA (New York), called Timeline.

Gordon was the 1996 recipient of Britain's Turner Prize for the presentation of his work at the Van Abbemuseum (Eindhoven), and for his contribution at The British Art Show; in 1997 was awarded Premio 2000 at the Venice Biennial, and in 1998 he was presented with the Hugo Boss Prize at the Guggenheim Museum in SoHo. He was also included in the SkulpturProjekte in Münster in 1997.

Curiosly, he is of the same generation of artists of the Canadian Stan Douglas and the two artists were put together in the DIA exhibition in NY where they presented two works that were both very similar but valso ery different at the same time, which became apparent when shown together.

He lives and works between NY, Glasgow and Cologne.

Copies of the works of Douglas Gordon can be purchased and rented for exhibition at EAI and VideoDataBank.
Alessandra Martina
Are you Douglas Gordon?