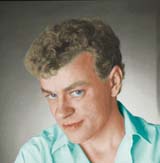 
Prominent underground film maker, McDowell usually worked with sex, gay world, pornography and hardcore. He died of AIDS in his San Francisco when he was 42 years old. His films includes 'Pornogra Follies, a musical described as a ''bisexual scatological revue'' and Nudes, a collection of sexual sketches.
Are you Curt McDowell?