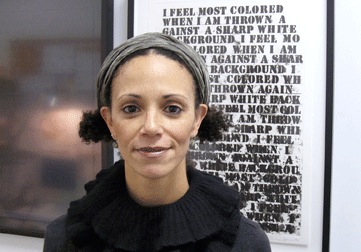 
Coco Fusco is a New York-based interdisciplinary artist, writer and Director of Intermedia Initiatives at Parsons The New School for Design. She has performed, lectured, exhibited and curated around the world since 1988. She is a recipient of a 2003 Herb Alpert Award in the Arts. Fusco's performances and videos have been included two Whitney Biennials (2008 and 1993), the Sydney Biennale, The Johannesburg Biennial, The Kwangju Biennale, The Shanghai Biennale, InSite O5, Transmediale, The London International Theatre Festival, VideoBrasil and Performa05. She is the author of English is Broken Here: Notes on Cultural Fusion in the Americas (1995) and The Bodies that Were Not Ours and Other Writings (2001), and A Field Guide for Female Interrogators (2008). She is also the editor of Corpus Delecti: Performance Art of the Americas (1999) and Only Skin Deep: Changing Visions of the American Self (2003).
Fusco's work combine electronic media and performance in a variety of formats, from staged multi-media performances incorporating large scale projections and closed circuit television to live performances streamed to the internet that invite audiences to chart the course of action through chat interaction. Her most recent work deals with the role of female interrogators in the War on Terror. Those works include Operation Atropos (a film about interrogation training), and A Room of One's Own (a monologue about female interrogators). Fusco is currently developing a new performance that explores the "Black Codes" that were established in the Americas after slavery for the 2010 World Congress of the International Drama/Theatre Education Association in Brazil. She is also researching a new project on the experience of incarceration in the United States.

Are you Coco Fusco?