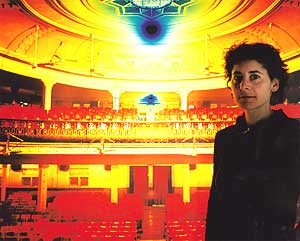 
Studied in London at the Slade School of Fine Art (1986) and at Goldsmiths' College (1990), graduating with an MFA. After a commissioned video work for Walsall's New Gallery in 2000 she had her first solo exhibition at the Jerwood Gallery, London, in 2001.
Yass is noted for her brightly coloured photographs, a number of which present an image which is a combination of the positive and negative. In video she is known for Descent ,2002, a film made by lowering the camera in a crane over a construction site at London's Canary Wharf.
In 2000, Yass designed the Christmas tree for Tate Britain, and in 2002 she was shortlisted for the Turner Prize.
Are you Catherine Yass?