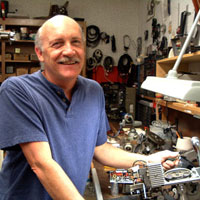 
Art Zipperer was born in Florida and raised in Georgia . Trained in electronics and electromechanics he ultimately decided to fulfill a lifelong interest in art. After private art school in Atlanta he went to study filmmaking in the Art Department of the University of South Florida and received a BA in Art and an MFA in Cinematography. His films are based primarily in the personal, experimental genre and have been screened at festivals, touring programs, and curated events throughout North America and beyond. He has also been an avid maker of sculpture and various forms of 2D art and particularly enjoys designing and building machines. An East Coast filmmaker making West Coast films, after several years teaching, eventually wound up in Arcata as an artist/technician. He has been here ever since.
Are you Art Zipperer?