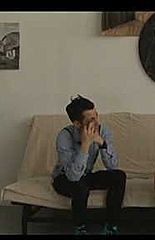 
Alex Mirutziu is a Romanian artist whose work cuts across multiple domains, including conceptual writing, performance, photography and video installations. His work endows social processes with ephemeral emergence as the main constructs in an attempt to reconfigure the relationship between information and form, psychophysical language and content, challenging origins and meaning.

After the disturbing soloist performance, "Atrocity Exhibition", in 2004, he continued his research at the University of Fine Arts in Cuenca, Spain, where his performative approach resulted in the suppression of one of his projects, which provoked strong reactions among artists and scholars in both Spain and Romania. Starting in 2004, the investigation of the real began when a new anatomical specimen emerged, "Lick&Destroy", a corrupt and ambiguous approach to identity, with which Mirutziu produced himself distinctively in discontinuous, contradictory virtualities.

He received international recognition in Madrid and Paris at Optica Video Art Festival, and was awarded Best Independent Artist.