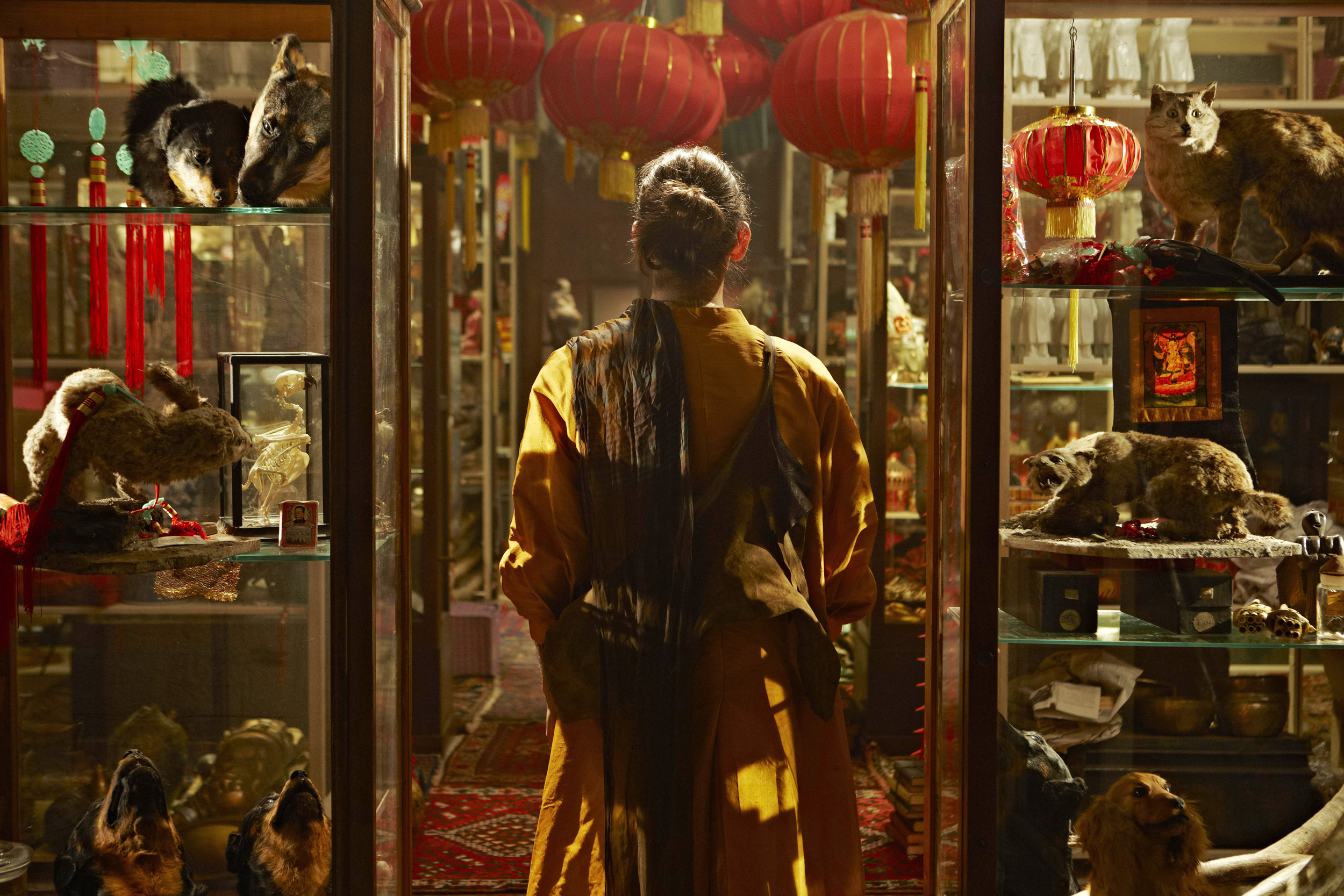 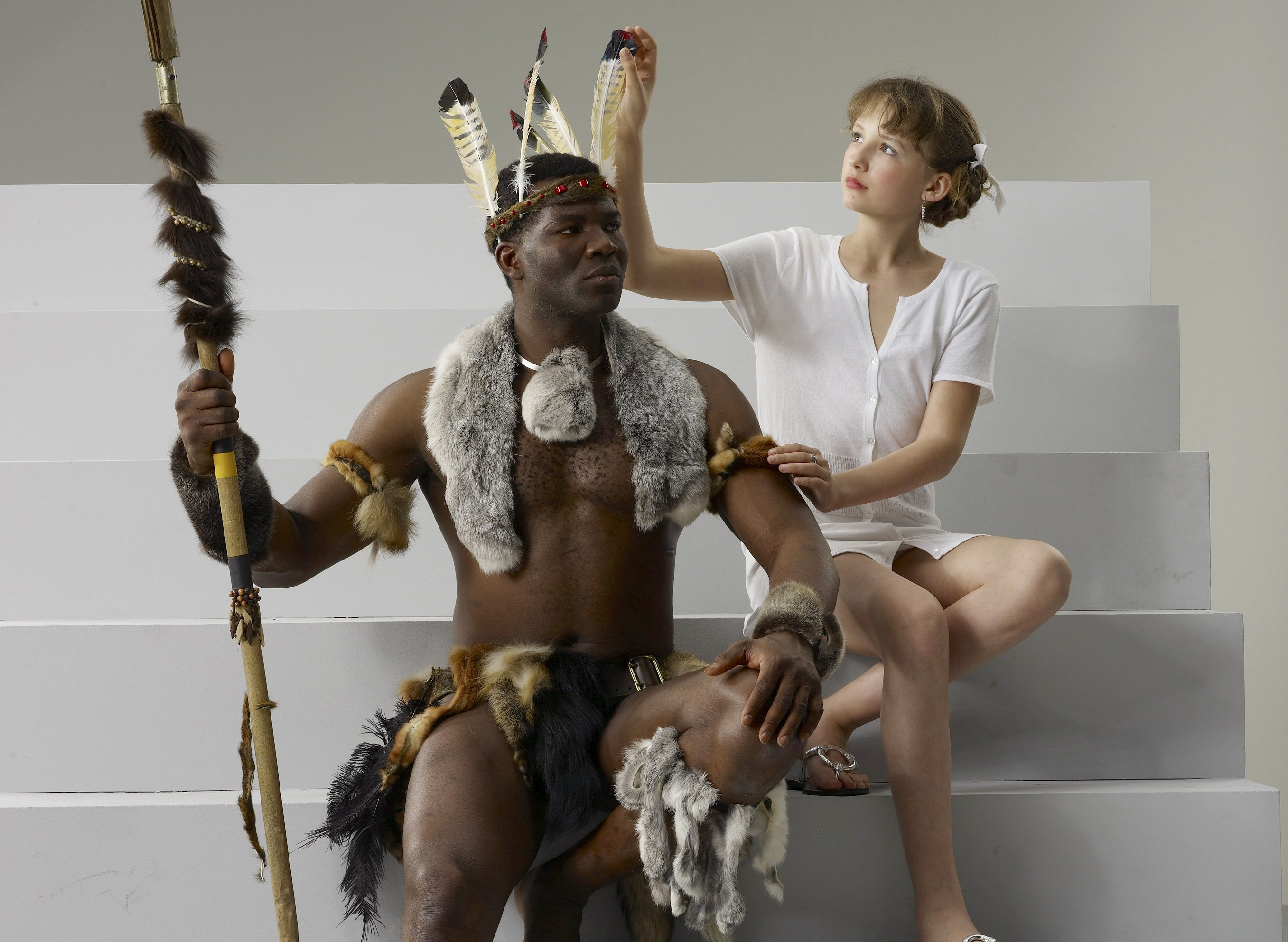 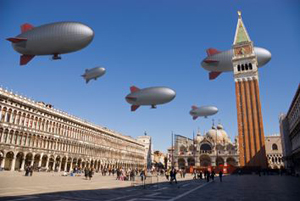 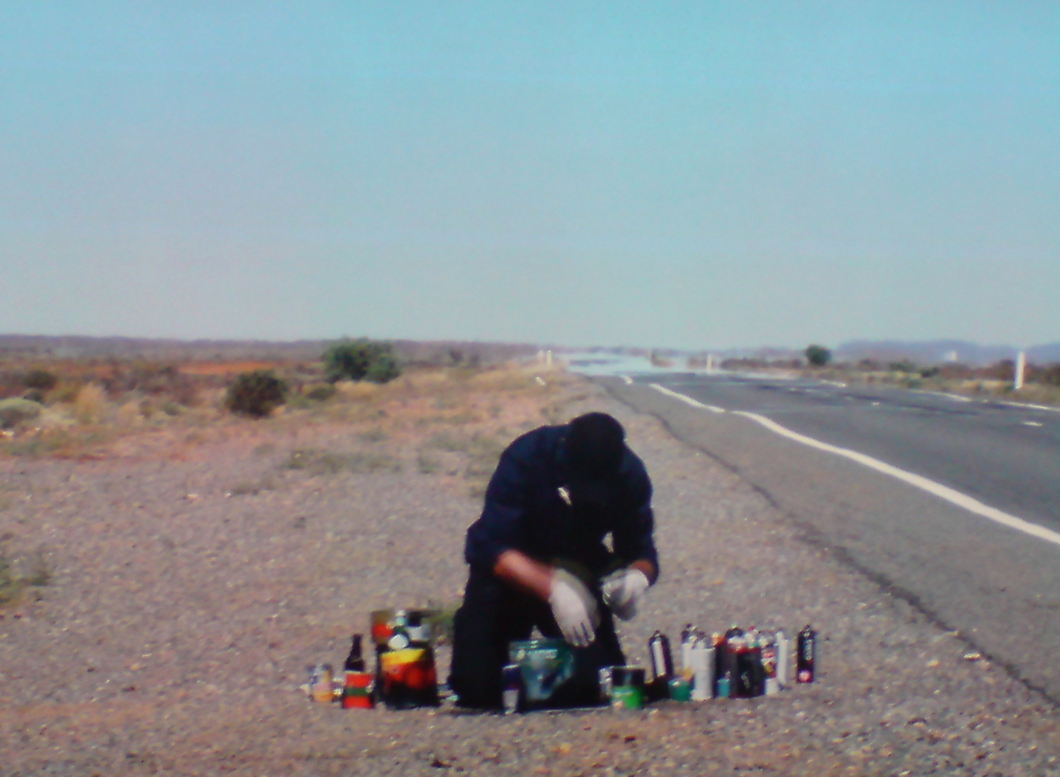 
Everyone was talking about the Fiona Tan installation (Disorient 2009) in the Dutch Pavilion, and there is a reason why. Projections of monumental proportions (Rise and Fall 2009), which instead of overpowering, lulled us; echoes of intimacy and impeccable synchronization among the varied dramaturgies of the montage. While in both projection spaces the audience could enjoy a momentary Lilliputian state whilst lying down on comfortable cushions, in a third room black and white single channel portraits (Provenance 2008) looked at us, at one time solemn and loquacious, both effusive and concealing, returning us to familiar, ergonomic proportions. In an effort to bring to an end the characterization of her work as "postcolonial", and thus close a chapter that lasted for more than a decade, Tan turns to monumental dimensions, striving to connect memory and identity once and for all, gleaning essentialist constructions of East and West, making use of Edward Said's Orientalism and Fernando Coronil and Avishai Margalit's Occidentalism.

The result is impressive. As a major and prolific video-artist, Tan's presence as a "Dutch National" in the Giardini is not only a good omen for the presence of video-art in Venice, but also confirms that the will to question (and dismantle) national categories is gaining momentum, comme-il faut. Before speaking further about the Giardini, I need to engage another monumental installation, not only because it allowed me to thoroughly disregard any trace of guilt of enjoying video-art as a (mega) show, but also because I reached it with a lot of difficulty, following a priceless insider's tip. When the task at hand is to review time-based works in such a short amount of time, recommendations of this kind are indispensable.

At the end of the Arsenale, a little boat delivered me across a canal. After enduring a long queue under a scorching sun the numerous parallel exhibitions of the Arsenale Novissimo come into view. The layout was confusing; halls were intertwined with each other and no staff, maps or signs where in sight. The work by AES+F (The Feast of Trimalchio 2009) was part of Unconditional Love, a parallel exhibition organized by the Moscow Museum of Modern Art and the National Centre for Contemporary Art, Russia. In order to sustain its curatorial vision the organizers argue: "[to] take away the tacky conventions and bland comforts of romance, […] love is not a distraction from existential crisis-it is a crisis, a sensation of the present so powerful it brings about a confrontation with the void. Unconditional love suffocates and seizes, subdues and annexes. It has the immediacy of both an orgasm and a pistol to the head" A panoramically orgiastic tension keeps the spectators fixed in a bacchanalia of astonishment, immobile and reverent. Only two terms could squander any doubt about the scientific pyrotechnic of AES+F new piece: money and more money. The mercurial voluptuousness of the financial and marketing strategies of this group of artists, who adapted the word "collective" in a very typical manner of modern day Russia, is so visible that it hides itself as a syncopated myth resolving the ubiquity of its opulence with a discreet belch. The servants and their "masters" alternate pleasures and reverences as in Petronio's Satiricon, except that in the work of AES+F their roles do not depend on a phenotypical global constellation, but rather dismantle it.

Despite the frivolity and ostentation present in this monumental and panoramic montage, a sensation of vitality (euphoria?) and optimism overwhelms us when we finally achieve to slip away from its seductive allure and go back to the little boat and the harsh sun. This is a piece simply out of this world. Going back to the Giardini and the Arsenale, in order to approach the role of video-art in Daniel Birnbaum's selection, it is mandatory to signal the almost systematic articulation of pluri-dimentional elements around the projection. In the fantastic forest by Nathalie Djurberg (Experimentet 2009), enormous flowers devour semidarkness while complementing the filmic dramaturgy nearly to saturation. In spite of its iterative quality, this dangerous exercise easily solved its challenges without major setbacks.

The artist gained the Golden Lion as Promising Young Artist. The pedagogic tendency to present video-art contextualized by its multidimensional counterparts became evident in other works like Héctor Zamora (Swarms of Airships, 2009), where an airship floats right above one of the very long external corridors of the Arsenale while models made to scale hang from the ceiling. The same propensity was evident in the presentation of drawings (Energy Trees 1970-1974) by Gordon Matta-Clark which accompanied Tree Dance, his 16 mm movie, 9' 32'' long. In the Venezuela pavilion, Magdalena Fernández (1pm006 [ara ararauna] 2006) combines her inspiration from drawings and the legacy of geometric abstraction by Jesús Soto or Alejandro Otero with nature and the moving image. On the screen, you see a three color composition inspired by Mondrian: purple, yellow and green, representing one of the most emblematic birds of the Caracas Valley, the macaw or the Ara Ararauna. "Reacting" to the sound of his song the composition destabilizes itself making an unpredictable connection between those two elements.

In the Australian pavilion Shaun Gladwell (Interceptor Surf Sequence 2009) elastically draws together the transition between the elements which appear on the screen and later in the pavilion. We can see the artist in a reddish, desert-like landscape, saturating one panel after the other with the help of black spray paint. The same elements reappear in the exhibition space in a concealing manoeuvre, yet noticeable thanks to the unmistakable smell of the spray paints, whose loathsome viscosity is displayed at length above a plank placed alongside that wall of concentrated darkness. Some of the time-based works selected by Birnbaum for the Giardini linked semidarkness and a play on shadows with an artisanal accent. This is expanded in the case of the bombastic installation by Rosa Barba (Coro Spezzato: The Future Lasts One Day 2009) with five 16 mm modified projectors discovering different phrases in the film paths with the aim of reconstructing the polyphonic tradition of Venetian Choirs.

In Constellation (2006-2009) Chu Yun creates an ensemble from every kind of electro domestic appliance and reduces its functions, allowing it to work only as a transmitter of small dots of lightness in a dark room. Hans Peter Feldmann (Schattenspiel/Shadow Play 2002) sets masses of small dolls on multiple revolving tables. The light reveals a spectral choreography, fresh and superimposed, constantly new, creating a blissful world void of migratory or economical social conflicts. The will to insist on the position of the artist as referent and leitmotiv to challenge the world (or "the worlds"), and to offer them total freedom to present their particular vision, isn't quite able to exorcise the spectrum of predictability. Therefore the general opinion was to classify the curatorial selection of Birnbaum's 84 artists as innocuous, or in the worst cases as over-aesthetized and boring. I'm allowing myself, or better, I feel compelled to paraphrase both Thomas Jefferson and Will Smith, in characterizing this whole endeavour as a conscientious pursuit of (global) whiteness.

The ever outstanding presence of Georges Adéagbo (La Creátion et les creátions…! 2009) has an unmistakable aura of authenticity á-la-africaine, comme-il-faut, just in case. This could also be said of the monumental installation by Pascale Marthine Tayou (HUMAN BEING @ Work 2009), present, as Adéagbo, for the second time in the post-Szeemann era of the Biennale. The monitors were spread throughout a generous space, bigger perhaps than the busy African pavilion of the last edition, absent this year. They depict the life of a community of the African Continent, fully complying with exotic expectancies and chaotic Otherness that is preferred by global whiteness. A perspective that, in its specific North European nuance, insists on maintaining Blackness as an exclusive "sub-Saharan" category. In other words, it is only in this imaginary territory constructed by Hegel et. al that the problematic of the symbolic identity and geopolitics representative of Blackness can be "properly" outlined.

Asserting the generalization that the "true" Black Diaspora exists "only" in the United States, I couldn't possibly add to this, because even the global and iconic virtuality of Barack Obama was almost blatantly ignored by those invited to present us with their vision of seeing and creating the world(s). A Black or Postcolonial Europe? Well… In going back to the euphoric optimism of video-art, in the British pavilion Steve McQueen´s film (Giardini 2009) brings us back to an epic vision of obsolesence, combined with a perfectionist cinematography and an almost painful narrative. It hurts that there are so few pieces where the subject, a non-white European, appears as he is, not as a reflection of the reductionist imagination of colonialist supremacy. The two simultaneous projections provided an alternative to the devastating silence of the Giardini without the Biennale. They take us through its nooks and crannies and show us its tiny living beings; we also follow the path of two dogs that were convinced they would find something worth eating amidst the rubble of the exposition, and we experience the mysterious tale shared by two beings that don't say anything but stare and smoke, both waiting for the 'other'.

Bruce Nauman created his own topological garden interacting with the Venetian academic life in two different buildings of the University Ca' Foscari and the University IUAV. This broad and rigorous anthologic show premiered a sound installation (Days/Giornis (2009), which consisted of seven panels distributed accordingly along a corridor, was duplicated in each venue. The students voices articulated in loop the days of the week in each respective language. This dual synchronization operates in a circular manner, with the argumentative and tangible body of Nauman rightly recuperated in the prize-winning American pavilion of the Giardini. As a whole, this deterritorialized anthology was the ideal homage to the meditative quality of Nauman's work and his constant search to expand the intimacy of the studio to the public space.

I conclude with an exception to the rules of predictable curatorship comme-il-faut of Birnbaum, going back to the Arsenale garden, a brand new space where experimentation in such an abandoned place was stated with discreet credibility. Two small rooms inhabitated by a projection at the end of the garden present us simultaneously and separately with a horse, an adult man and a motorbike transforming themselves incessantly into each other (Bestue-Vives, Proteo 2009). The sense of humour in the manipulation of banal elements made with minimum resources, reciprocated by an unmistakeable critical stamina, unveils the thought-about possibilities for a world where I would like to live, thinking and dying from laughter and living exactly for that, according to my little book, comme-il-faut...