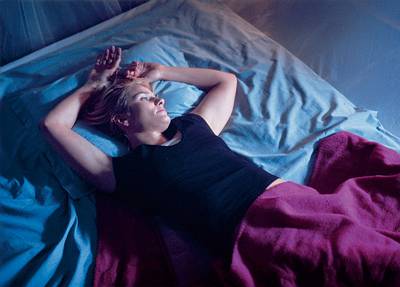 The hour of prayer by Eija-Liisa Ahtila
Shit in your hat, head on a chair by Bruce Nauman 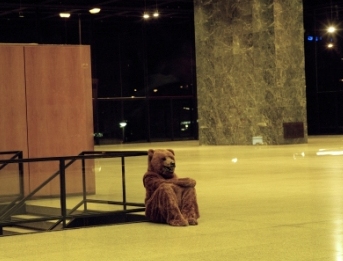 Video at the Italian Pavilion in the Giardini, Venice Bienale

The experience of Art, curated by Maria de Corral


The themes implied on the selection located in the 34 rooms of the host pavilion were those that disturb and worry the post industrial society, which the selected artists express in a real, poetic and visionary way, seen as survivors of a world dominated by media. Full of reflection and pleasure, the exhibit reveals the existing relationship between artists of separate generations.

We are welcome by Juan Muñoz uncapsizable laughs and Barbara Kruger straight statements printed in the façade of the pavilion, such as “Sold power, you make history when you do business” and “Admit nothing, blame everyone”. Kruger was awarded with the Golden Lion for Lifetime achievement this year’s edition. In the reception one of the huge wall suckers from the Venetian artist Monica Bonvicini, hanged from the ceiling opens a bit more our senses to get ready for the tour.

The Canadian Stan Douglas, represented by David Zwirner gallery in New York, played a creatively structured film of Cuba’s reality in a moment of crisis and exodus, “Inconsolable Memories”, where Sergio sees how his friends emigrate while he critically narrates how everything changes, including his dreams.

A huge cast stairwell of Rachel Whiteread suggest the human trapped within the mass, surrounded by Thomas Ruff newest works, extra large pixilated c-prints, awarding us of our own evolution or degeneration in the perception of beauty along with the development of new art technologies.

Further on, the screening of the Finish Eija-Liisa Ahtila rhythmic work “The hour of prayer” displayed in four screens, metaphors her research for emotions while pushes the audience capabilities to perceive a multi channel installation. In Vasco Araujo’s projection “The girl of the golden west”, a Texan woman narrates in her own words Puccini’s opera La Fanciulla, addressing with seducing simplicity the limits of identity and race still in use nowadays.

Bruce Nauman brilliant 1990’s installation piece “Shit in your hat, head on a chair” owned by La Caixa Foundation, reflects on the nature of power and submission, with repetitive absurd orders given to a mime. The Irish artist Willie Doherthy, presents a claustrophobic video which smartly addresses the roots of violence.

The Cuban Tania Bruguera presented a tunnel made out of tea bags, in an attempt to show the deculturalization, regarding the reinterpretation of the traditional Indian product by the British conquerors. Shaded among the tea bags where small video projections of loops on diverse cultures and etnies.

Flex, by the South African artist Zwelethu Mthethwa is an impressively aesthetic piece, leaving open to the receptor what these two men are doing, but the effort on the duty is clear. Perejaume, represented by Galeria Joan Prats, revives the staged canvases by Coubert, bringing them to life through the use of video.

The exhibit had also proofs of the performance of Mark Wallinger “Sleeper” where the artist stayed at the Neue Nationalgalerie of Berlin wearing a bear custom, resembling the muteness imposed on artists by contemporary conditions of cultural production. The fantasies on film of Francesco Vezzoli were also displayed, with the 2005 piece “Trailer for a remake of Hore Vidal’s Caligula”.

Honore d’Or in the Belgium pavilion has a installation with ordinary objects which constantly merge from reality into art and vice versa, blurring the boundary between art and commonplace, interacting with the spectator within a web of underlying mechanisms and connections. This pavilion shows as well a computer presentation with works by many other Belgian representative artists.

For the first time, a special Golden Lion was attributed to the disappeared Harald Szeemann, who directed the Visual Arts section of the Venice Biennale from 98 to 2001.