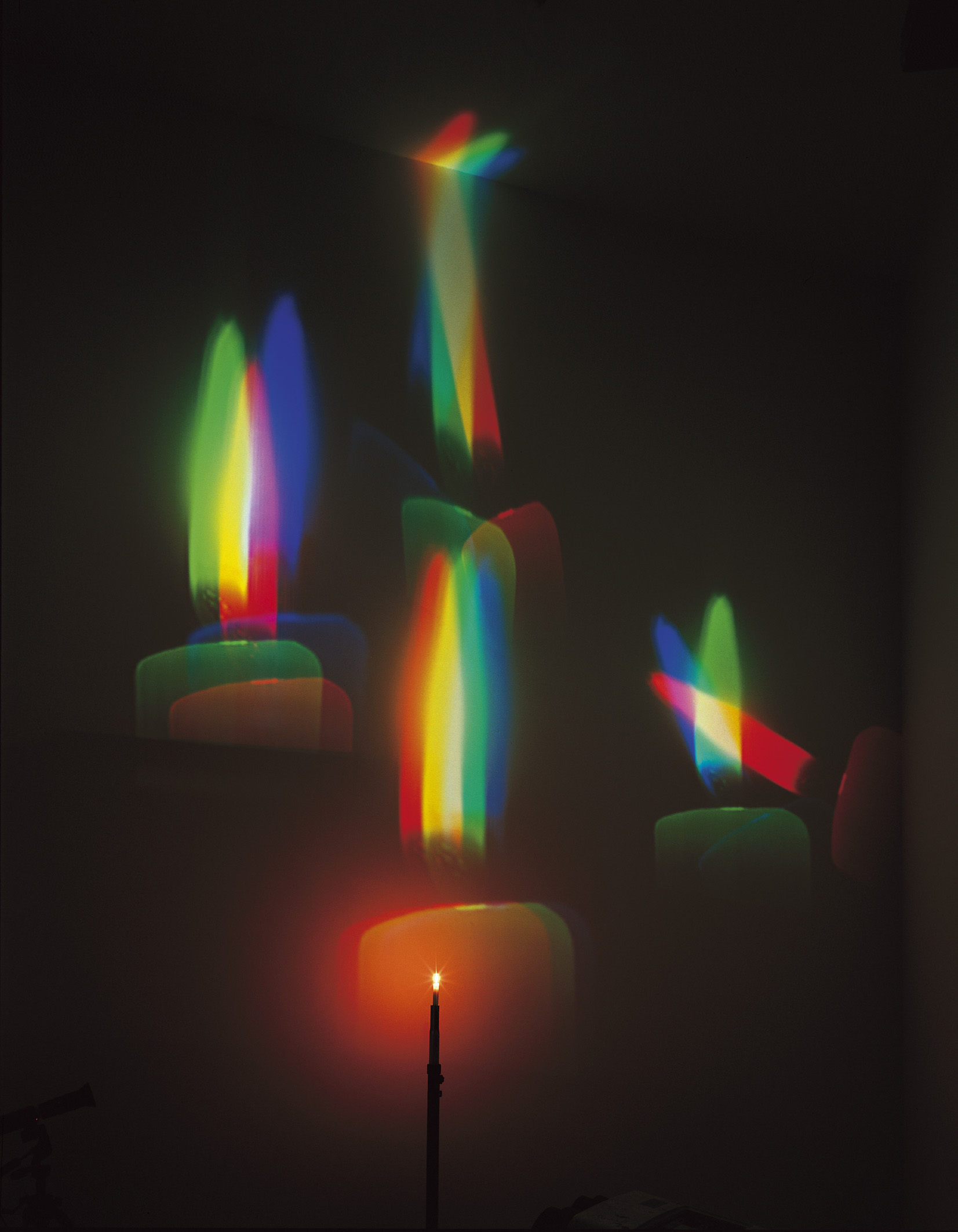 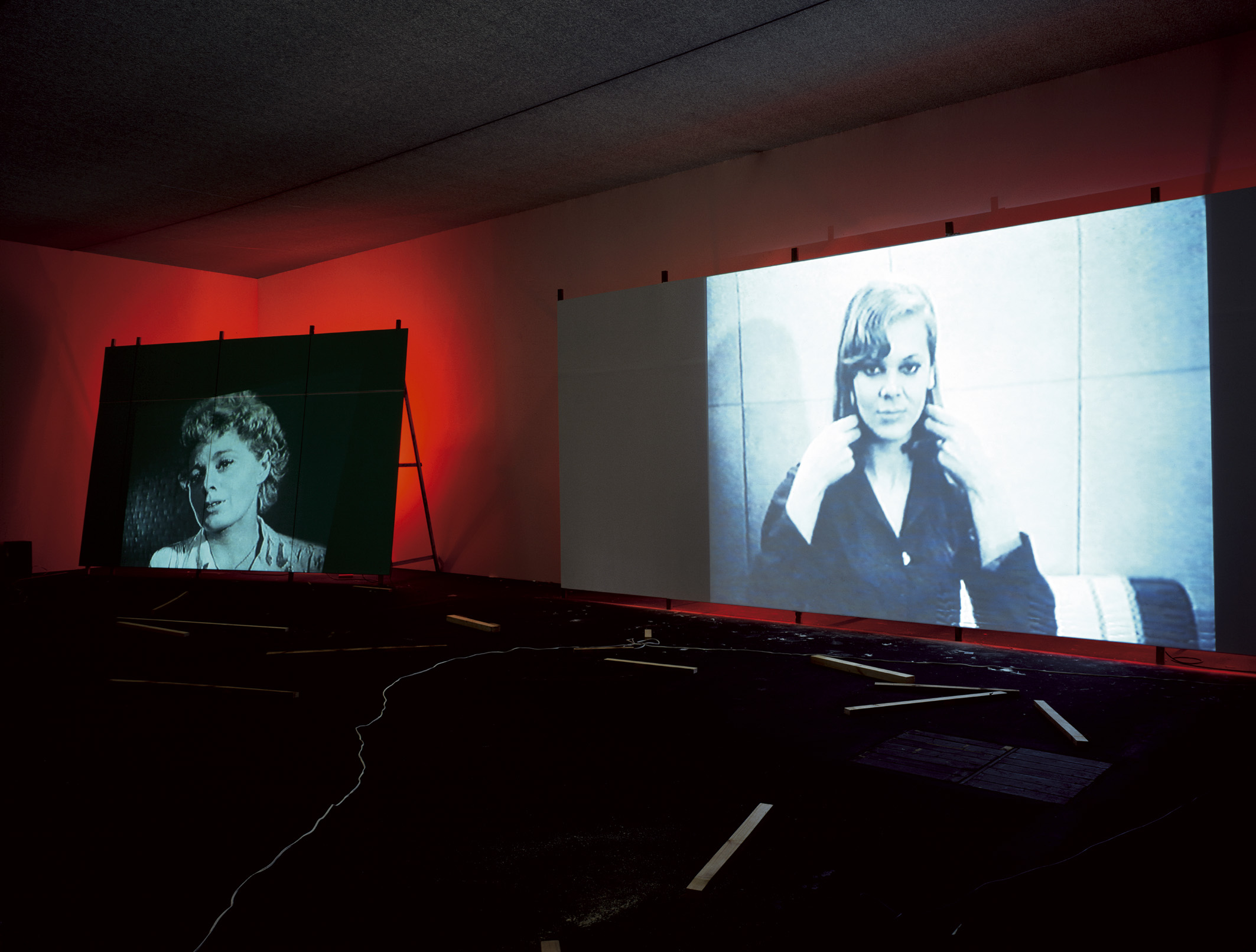 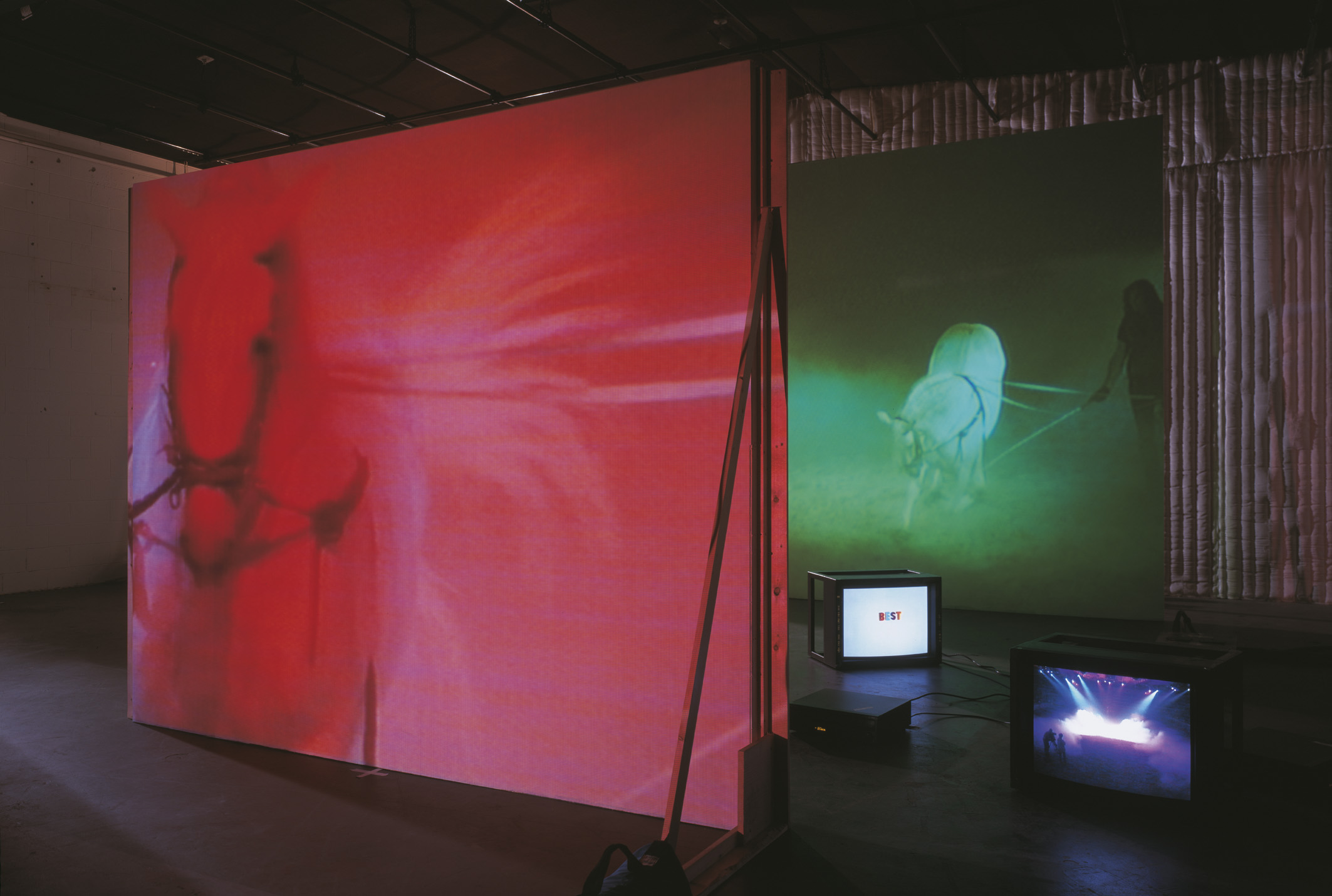 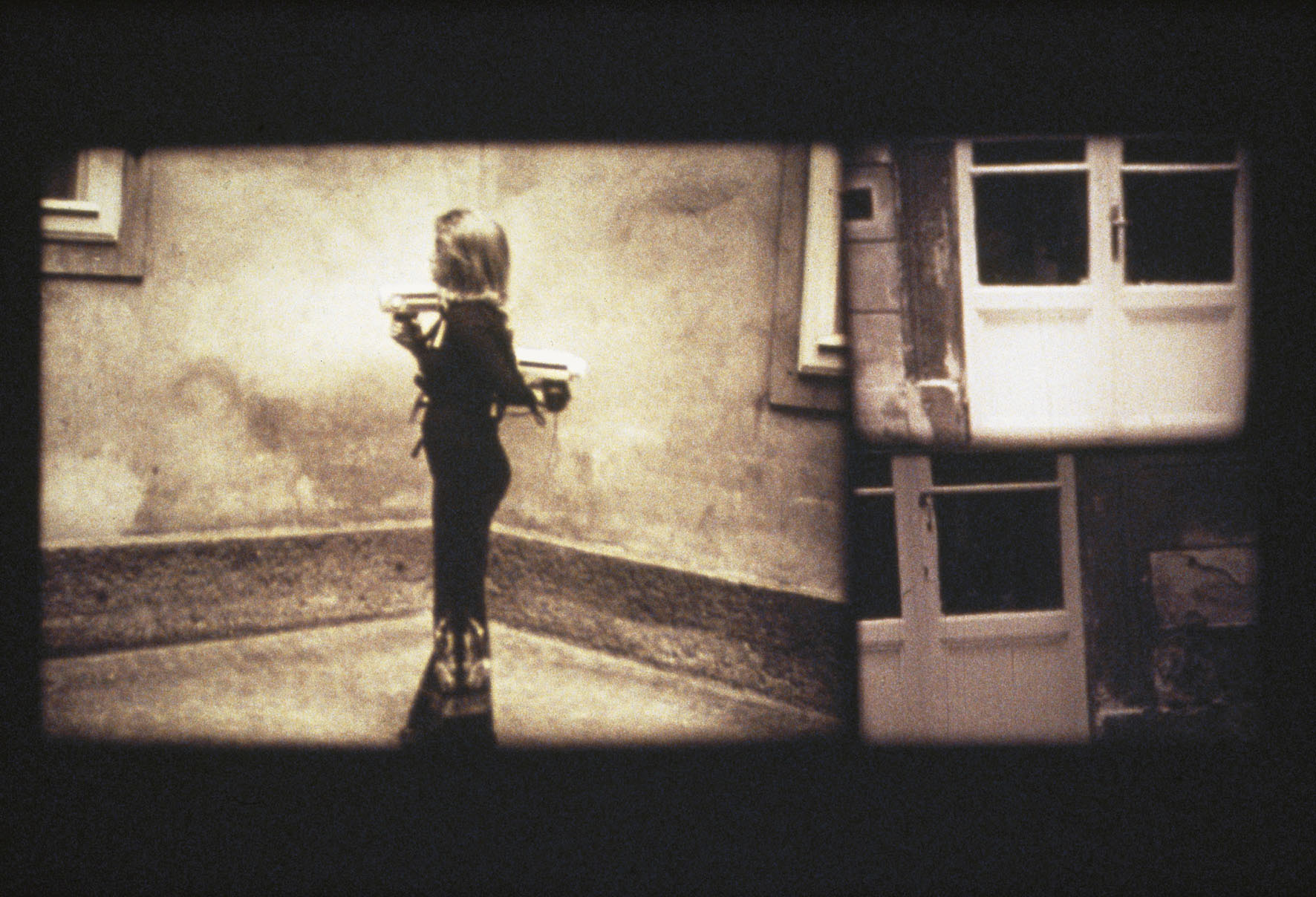 Walking in the Big Black Box , Beyond Cinema


Moving images in a museum are not a new thing. Since the beginning of the XX Century, artists were concerned with movement and temporal dimension in art works. The futurists reflected the new urban rhythm through paintings and photography in which traces of movement could be seen. The cubists brought multi-perspective vision to art, which plays such an important role in new cinematic installations.

The introduction of moving images in an exhibition space also begs the question of how these works are perceived by the audience. The visitor is confronted with two opposite systems of vision at the same time. On the one hand, museums traditionally have the task of preserving and protecting the identity of art pieces, its unchangeability and immovability, offering an unlimited time of contemplation of the works, which is dictated individually by the viewer. The art works are immobile and the viewer mobile.

On the other, and since the beginning of film history, moving images were conceived to be shown in film theatres, where a collective audience remains immobile, captured in a certain spatial position for a determined time, dictated by the length of the film, and finally by the filmmaker, if –in the best case scenario- the film industry doesn’t constraint his/her artistic aim.

It is remarkable that, in the pre-cinematographic time, most of the optical tricks produced the illusion of movement through bodily movements of the viewer, and in the first kinetoscope parlors (rooms with several kinetoscope devices, each one containing a short film) the individual viewer could choose which film to see and for how long.

In the ‘60s the concept of Expanded Cinema aimed to break the boundaries of art genres. Artists themselves produced cinematographic installations which involved the audience in multimedia environments, using multiple screens, projecting films and slides onto different surfaces or even on human bodies, and exploring the cinematographic apparatus beyond its mere functionality. This integration of cinematic elements in visual arts opened the path to the presence of film in exhibitions spaces and inspired a lot of artists to work with video, film and new technologies for galleries and museums.

In terms of viewer perception, both are now moving: the images as well as the viewer. The contemplation time is no more just a viewer’s decision; the length of the art piece imposes its own regime too. The viewer could find himself in a difficult situation, choosing between going on as he does in the museum or stopping to watch the moving images as in a movie theatre. Actually the artworks are related to the others in the museum, exhibited together in a new context where -through similarities and contrasts- dialogue is born.

In the exhibition Beyond Cinema. The art of projection the visitor is conveyed to follow a path through some of the most important historical film and video installations and recent works. Walking along the enormous black box of the big corridor of the Rieckhalle (the 330m-long storehouse beside the former train station Hamburger Bahnhof) we, the viewers, have to compromise once more in our time of contemplation to experience the richness of this show. It is not that difficult though.

Before our excursion in the dark starts (and only illuminated screens and sounds guide our steps), we find the installation "Criminal Eye"(1995) by Tony Oursler. Projected on a sphere, an oversized, disembodied eye is looking at TV images that we cannot see but hear, prisoner in its immobility of circular movements. Seeing this eye at the beginning of the exhibition is becoming aware of our own mobility as viewer and to experience the power of the projection of images.

Diana Thater displays a trained horse in her four-channel video installation "The best space is the deep space"(1998), producing a play between projected images and monitors placed in front of the viewer at different distances. Our movement allows us to change our viewing point raising awareness of both dualities, the two-dimensional aspect of the images and the tri-dimensional effect of the installation and the complex relations of culture and nature, the wild and the tamed.

The Swiss artist Pipilotti Rist deploys too contradictory feelings in her famous piece "Ever is Over all"(1997), in which an apparently sweet and feminine woman wearing shiny red shoes smashes car windows with a long flower that is in reality made of steel. A hypnotic soundtrack accompanies her smiling face and that of the policemen who greets her politely and left her continue with her glorious activity.

Two big screens placed in a corner of the room project the brilliant, joyful mood of the video onto the numerous coloured cushions placed on a big carpet inviting us to take our time to enter in this pseudo-innocent universe.

Working with already existent cinematographic universes is the strategy of Douglas Gordon in his installation "24 hour Psycho"(1993). Gordon undertakes a new reading of Hitchcock’s masterpiece "Psycho" stretching the original length of the film to 24 hours, in which we can recognize the well-known images of the film, this time though silenced, extreme slow-motioned, isolated, separated of their plot strategies.

This nudity of the film images correspond with the spatial presentation of the installation, visible from every angle thus the screen is hanging in the middle of the room as if exposed to our analytical eye.

Monica Bonvicini uses film footage of the ‘50s and ‘60s with divas playing desperate women leaning on walls and doors. In her two-channel installation "Destroy she said"(1998) taking his title from Margarite Duras’ novel, Bonvicini shows these images onto rough walls illuminated from the back by red light, providing these women of literal support far from the male representation of woman in film.

The installation "Body Press"(1970-72) by Dan Graham places a woman and a man, naked, in a closed circular wall structure with one camera each one. Their spiral movement around each other records fragments of the body of the other. The resulting images of both cameras are projected on two facing screens underlining the dislocation between the spatial discontinuity of the imagery and the continuous time in which they were produced.

On the contrary, VALIE EXPORT explores the outdoor space using two S-8mm cameras fixed on her stomach and her back. "Adjungierte Dislokationen"(1973) allows us to see in a three side-by-side film installation the images of the artist performing this action and those filmed by the two cameras. The three projectors are visible in the installation too to reveal a proximity to the cinematographic apparatus and create a multi-perspective vision of the filmed space.

From several points of view Eija-Liisa Ahtila weaves the narratives of a young couple’s separation in the two-channel installation "Consolation Service"(1999). Showing the same episodes of the story under different perspectives, she creates a melancholic tableau in which time, feelings and the complex emotional relation to the other play the main role.

Following this intimacy atmosphere, we enter in the private sphere of an old lady sitting in a porch in "Rocking chair"(2003) of David Claerbout. In a two-sided projection we see both the woman from the inside and outside of her house. The photography-like image comes into life when we move across the space producing a very subtle reaction on the woman, as she would feel our presence. This relationship between photography and film is as well a key point in the ambiguous Gary Hill’s large-size installation "Viewer"(1996), in which a group of 17 workers on a line are standing in front of us and staring us, raising the question of who is viewing and who is being viewed.

Nam June Paik approaches the relationship between object and representation in his closed-circuit installation "One Candle (Candle Projection)"(1988), where a burning candle is recorded by one camera and projected by five projectors on the wall around the candle itself. The projected images not only magnify and multiply the candle but they de-compose it too into the three primary colours video work with: blue, green and red. The luminous object and its deployed visual representation through light projection coexist in a beautiful environment between meditative Zen tradition and technology.

In the last room of the exhibition we find the disembodied heads of Bruce Nauman in his installation "Raw Material with continuous Shift- MMM"(1991), turning around his own axis in impossible positions on meditative infinite loops, while the artist hums “mmmm”. Nauman shares the last room of the exhibition and his uneasy state of mind with the extreme perceptual experience of Paul Sharits’ film installation "Epileptic Seizure Comparison"(1976).

Images of medical studies about epileptic patients are shown in two flicker films one on the top of the other, alternating with full colour fields. We are allowed to enter in the narrow trapezoidal space with reflecting walls, where the projected and at the same time reflected imagery produces a strong physical and emotional experience.

The exhibition "Beyond Cinema. The art of projection" submerges us in an enlightened emotional and cognitive travel through projected images, displaying a selection of more than 40 years of illuminated art. Walk in the big black box to find the light.