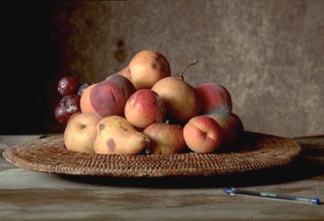 
The value of immaterial In the arts such as literature, cinema, and music, commercial success is measured in terms of copies or tickets sold. Critical success may exist apart, as does niche market success independent of overall sales, and conversely, many popular best-sellers are not considered much in certain circles.

In the art world, success is measured, as a general rule, by price. It is in its nature - a painting is a unique, hand-made object that contains within it a unique history of the work and of the artist. While the same is true for a reproducible work, the actual object, the book or CD, usually has no inherent history and no inherent value. One copy is as good as the next, while with a painting, one is all there is.

At first glance, video art looks to be the same as literature or music. DVDs are very similar to CDs - small, flat, and round, and easily copyable. There is a reasonable argument that DVDs should and could be treated and sold in a similar way to CDs, and there are distributors of artists' video works that work that way.

The art world, however, does not work that way, and sees, also quite reasonably, that selling video art in limited editions is akin to selling limited edition photographs or silkscreen prints. While there may be no real reason to limit the number of prints or DVDs, there is no reason not to, either.

Economically, galleries have to sell works at a certain price to pay for quality exhibitions and associated expenses, and artists need to earn a certain amount to produce works, and this means limiting an edition to keep the price up. This also means that, supported by collectors, visitors to galleries can see the work for free, whereas the same cannot be said of cinemas or video distributors.

Still, there is a general sense of insecurity about what it is that galleries are selling. As opposed to a print or a photograph, you are not actually looking at the round DVD itself. A DVD is encoded with numbers that are read by a DVD player and shown on a screen of some sort.

Some video art works are sold as an installation with the complete package of televisions and screens and media, some are sold as simple DVDs. Some artists and galleries worry about having a DVD reproduced, some do not care as long as "preview" is watermarked on the video, and some do not care at all since it is the signed copy along with its certificate of authenticity that is the work of art. This original piece has the highest quality to be preserved over time, to be restored when needed, having therefore the possibility to be resold and the rights to be shown in public exhibitions.

If it is that, a signed DVD and certificate, that the galleries are selling and collectors are interested in buying, then that is the only thing that matters. If one copy is the same as another, then why have the signature? And if the signature and certificate is the important thing, then why worry about extra copies floating around?

There are Bill Viola limited edition video works, but there are also unlimited (and unsigned) edition DVDs for sale at a reasonable price. Neither he nor the museums and collectors worry about it, and what is good enough for Bill Viola should be good enough for the rest of us. There may be thousands of urinals the same as Duchamp's, but it is his particular urinal that is the important one. The fact that there were millions of Brillo boxes the same as Andy Warhol's does not depreciate its value, it is its value, and exactly its point.

In fact, it is two points - one being that it is the same as the other boxes, and two, that it is Andy's box that is the more valuable, being Andy's. The guitars that Hendrix or Lennon actually played are somehow different than their identical copies, and should they be signed, even more so. Whatever the psychological roots of fetishism, the magical properties of certain objects affect us all in one way or another, whether we wish it or not and whether we admit to it or not.

Given that one copy is the same as any other, it may not quite make sense, but in art, magic is more important than making sense.