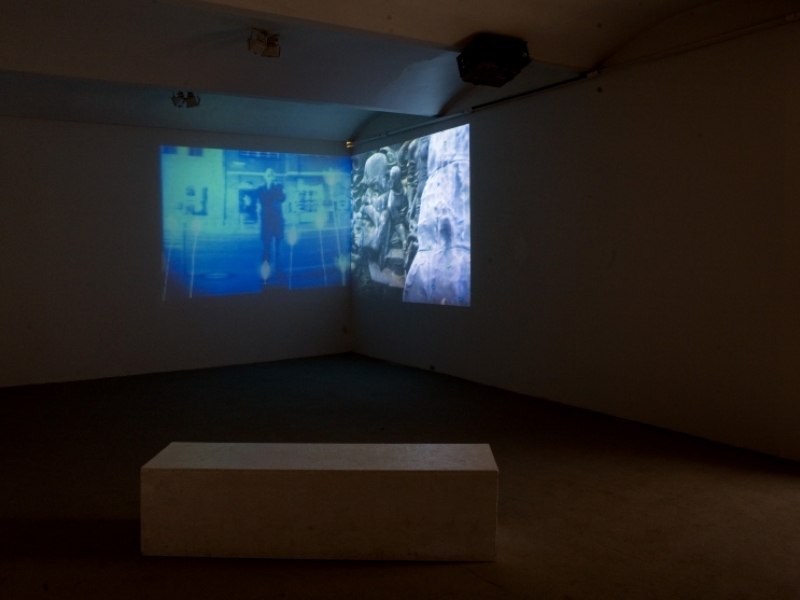 The Punctum exhibition was realized in the Futura Centre for Contemporary Art. Situated at the Smíchov district in Prague since 2003, the centre has simple white halls, an adjoining garden as well as cellar spaces which can be adapted to the individual installations. In 2007, Alberto di Stefano of the management came up with the idea of creating a series of exhibitions dealing with the individual media of video, sculpture, painting and photography.

The first exhibition of the series was curated by Václav Magid; an active artist, contemporary art critic and theorist as well as chief editor of the Notebook for Art, Theory and Related Zones, a professional journal published by the Academic Research Centre of the Academy of Fine Arts (VVP AVU). According to Magid, the exhibition was intended as a representative showcase of contemporary Czech art of the moving image, however, without making a claim to objectivity. The self-confessed subjectivity of the curatorial selection was clearly declared in the very title of the exhibition alluding to Roland Barthes‘ term “punctum” which denotes the subjective perception of photography by the recipient. Václav Magid transferred this theoretical concept of interpreting photography as a technically reproduced artwork to that of the moving image taking place in time. According to the curator, the title was partially conceived as a provocation, challenging the expectation that the exhibition would give a general overview of the existing ways of working with the moving image or represent a confrontation with the medium of photography. With its subjective or even nostalgic tone, the term “punctum” enabled Magid to give more and more weight to my own conviction as to the qualities of the individual artworks and their potential to create an interesting whole. In the end, the selection presented the artists active primarily on the then current Prague scene. While some of them had been employing the moving image on a regular basis (e.g. Mark Ther, Michal Pěchouček, Ondřej Brody), others have done so only sporadically or even exceptionally. The aim was not to create a showcase of “video artists” but rather to present those artists who employ video as one of the media. The objective was to select brand new works so that the effect of “punctum” would not be weakened. The only exception was represented by the Passenger Train installation by Michal Pěchouček, which had already been exhibited at the monographic exhibition Passenger Train (Jiri Svestka Gallery, Prague, 2006). However, none of the videos has been made directly for the exhibition. The selection consisted in encounters and consultings of the existing works or works in progress with the individual artists. What was important was the debate on the individual artistic approaches and Magid’s curatorial concept. As to this method of selection, Magid said that I did not manage to meet all of the artists immediately before the exhibition; some of them would only send or give me their DVDs, e.g. Pavla Sceranková and Martin Zet. In case of Jesper Alvaer, who was in Los Angeles at the time, I even selected a video on the basis of a verbal description; this would represent a compromise between the accessibility of the works and the requirement of exhibiting brand new works; originally, I had been captured by Jesper’s “video moments” he used to make around 2000 (whirling pigeons, spilled oranges), however, those have already been exhibited and have been known in other ways.

The videos presented at the exhibition can be divided into three groups; “documentary videos” capturing referential reality and the authentic atmosphere of the event (e.g. Pavla Sceranková, Sláva Sobotovičová, Radim Labuda); “narrative videos” based on a narrative line (e.g. Michal Pěchouček, Mark Ther, Ondřej Brody and Kristofer Paetau); and “installation neologies” employing the presentation of the moving image in the gallery space in an innovative way (e.g. Ján Mančuška and Jonas Dahlberg, Zbyněk Baladrán). As to the arrangement of the individual groups of videos, Magid said in the press release that the exposition is divided according to a loose thematic clue. Its aspects represent a minimal construction framework of the exhibition. However, what is more interesting than the very framework is the cracks left in its walls.

The individual videos and artists were linked neither by the theme, recording technology nor their conscious affiliation to any art movement. The selection rather resulted from the curator’s intuitive approach and the conceptual approaches of the very artists. The Punctum exhibition provoked a relatively strong media response, which is partly due to the fact that there had been but a few collective exhibitions focusing purely on audiovisual art. The first makers of Czech video art were introduced in 1994 at the Český obraz elektronický (Czech Electronic Image) exhibition in the Mánes Gallery. After a long pause, there was the travelling exhibition Frisbee (2004-2006) curated by František Kowolowski followed by Věcné stavy (Objective States, 2006) and Punctum (2007), both curated by Václav Magid.

In his review written for the Nový prostor magazine, dramaturg of the NoD gallery and art critic Jiří Ptáček analyzed the deliberate creation of chance, which, in his opinion, is contradictory to the very term “punctum”. According to Ptáček, Punctum rather became its antipole; the “studium”; another term mentioned by Roland Barthes in Camera Lucida. This approach provokes but a polite interest; one can like the picture but is not absorbed or pierced by it. It seems as if Magid was not satisfied with the “injury” caused by the artworks but had to link the exhibition to culture; a contract made between the artists and consumers, which is surprising yet comprehensible, so that it cannot stir us. In my explanation, the original assignment; to make a display of contemporary Czech art of the moving image; seemed so obliging that he did not dare to bring the story of his personal satori (an intuitive experience, enlightenment) to an end.

In his article for the Film a doba magazine, artist in the field of computer art and graphics, critic, theorist and lecturer of the Centre of Audiovisual Arts of the Film and Television Academy of the Academy of Performing Arts (FAMU) in Prague Miloš Vojtěchovský criticized the close interconnection of the exhibited works and the artists, calling it a poetics of a personal obsession. It is hard to say how many visitors outside the local community of young permanent Prague exhibitors may have been pierced by these “punctual” images.

Other authors of reviews and criticism included Jan Vitvar (Respekt magazine), Edith Jeřábková (A2 weekly) and Zuzana Štefková (Cinepur magazine).The Punctum exhibition received the Umělec má cenu (Artists Are Appreciated) award by Jiří Kovanda for the best collective exhibition of 2007. The award is presented to artists over 35 years and is based on a nomination survey.