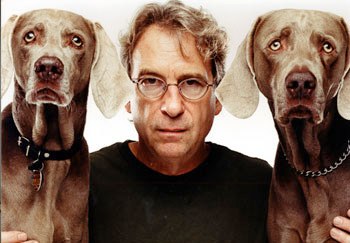 
Born in 1943 in Holyoke, Massachusetts, studied painting at Massachusetts College of Art and the University of Illinois, Champaign-Urbana, receiving an MFA in 1967. He began producing short, performance-oriented videotapes in the early 1970s.

In 1972, Wegman and Man Ray moved to New York. In 1986, a new dog, Fay Ray, came into Wegman's life, and soon thereafter another famous collaboration began, marked by Wegman's use of the Polaroid 20 x 24 camera. With the birth of Fay's litter in 1989 and her daughter?s litter in 1995, Wegman's cast grew to include Fay's offspring: Battina, Crooky and Chundo. Since then four new dogs have joined the family.

After teaching at various universities, Wegman's interests in areas beyond painting ultimately led him to photography and the infant medium of video. While living in Long Beach, California, Wegman acquired Man Ray, the dog with whom he began a fruitful twelve-year collaboration. Man Ray became a central figure in Wegman's photography and videos, known in the art world and beyond for his endearing deadpan presence, that would make Buster Keaton jealous, and so photogenic that cameras did more than adore him - the lens literally found itself lost in the dog's deep, soulful expressions - Man Ray was supermodel material.

In conjunction with his canines, Wegman created classic images that both perfectly spoofed and flawlessly captured the subject he was staging, from a traditional fairy tale to a comment of modern social norms.

But while the still image intrigued him, Wegman was also interested in the advent of the latest in moving picture technology - the video tape machine. Owning one of the original reel to reel examples, he began crafting short films, experiments in content and context.

Like many medium innovators before him, Wegman translated the language of magnetic tape and defined the parameters of its artistic abilities. His efforts here are funny, original, and on occasion, deeply profound.

His film, The Hardly Boys in Hardly Gold screened at the Sundance Film Festival in 1996. His other works include the books, Puppies, Cinderella, Little Red Riding Hood, ABC, 123, Circle Triangle Square, Farm Days and Mother Goose.

His photographs, videos, paintings, and drawings have been exhibited in museums and galleries internationally. A retrospective of his work traveled to museums throughout Europe and the United States, including the Whitney Museum of American Art in New York and Centre Pompidou in Paris. His most recent exhibitions have gone to Japan, Sweden, and the Orange County Museum of Art in California. Recent gallery exhibitions include new photographic and video work with Pace MacGill in New York and Marc Selwyn in Los Angeles as well as exhibitions of new paintings and works on paper with Texas Gallery in Houston, Sperone Westwater Gallery in New York and Galeria Cardi & Co. in Milan. In the spring of 2006 a retrospective organized by the Addison Gallery of American Art, Phillips Academy, Andover, Massachusetts, with a catalogue published by Yale University Press will begin a two-year tour opening at the Brooklyn Museum.

William Wegman lives in New York and in Maine where he continues to make videos, to take photographs and to make drawings and paintings.
Are you William Wegman?