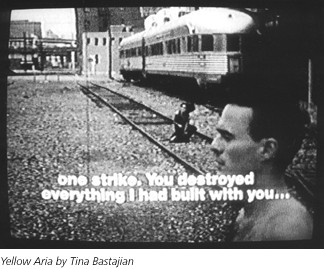 
is a film/video artist whose work has shown worldwide, from the Pompidou Center in Paris to the Museum of Flying in Los Angeles. She has received many honors and awards including a National Endowment for the Arts Media Arts Grant, and recently an ArtsLink/CEC Partnerships grant for teaching film workshops in Armenia. Through deconstruction of narrative and documentary forms, she creates layered and stylized tableaus which explore memory, exile, language, nostalgia and identity. Recently her film Jagadakeer? between the near & east, premiered and garnered an award at the San Francisco International Film Festival
Share