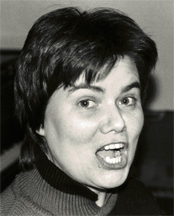 
Sorrel Hays is a very special artist, in the way she combines music with sculpture, film/video, dance, and actors in a variety of notated and improvised forms. As such her music takes form in the video or dance as well as the video or dance becomes music.

As well she made a movie her self. Her film "M.O.M. 'N P.O.P." (Music Only Music, Piano Only Piano) was a critical hit at Pro Musica Nova Bremen Festival, and has been shown frequently in the United States, including at the National Womens Studies Conference.
The audio video painting "Flowing Quilt" made in association with Marilyn Ries has been exhibited in various film festivals, including the Baton Rouge Revel. Other films include "C.D., The Ritual of Civil Disobedience", which was shown at the National Video Festival and in a touring exhibit of the American Film Institute. She directed and composed music for the films "House" and "Pill Woo", in collaboration with videographer Barbara Kristaponis. "House" was shown at the Women in the Director's Chair Festival in Chicago and on the Independent Film Series of Channel Thirteen in New York City.

Further more she worked a lot with music specialized for radio and she has written several operas. Her work has been showed and performed all over the world and often she gets invited to give lectures on her subject on universities. She has received many prices and awards and she has been given fellowships to several art institutions.
Are you Sorrel Hays?