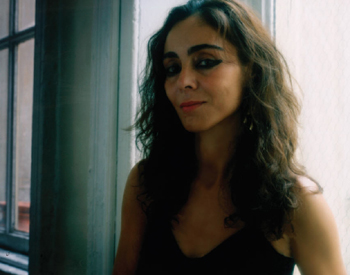 
Shirin Neshat is one of a growing number of contemporary international artists whose work crosses boundaries of nationality, culture, and artistic medium. Born in 1957 in Qazvin, Iran, She moved as a teenager to the USA to study art at the University of California, five years before the Islamic revolution overtook her country in 1979. Her first return to her home country After 12 years, in 1990, her encounter with a land so culturally, politically and socially altered in the period of her absence, inspired her all artistic work. She discovered a country which had changed entirely. With a critical and an emotional impact, and her resulting sense of displacement and exile, she reports on the cultural, social and political situation of the Iran of the Ayatollahs as well as on the social and cultural norms of western society.

Since her performance at the biennial in Venice (1999) Shirin Neshat is regarded as one of the most interesting female artists of the young art scene.

Using photography and video, she has produced a body of work that investigates the cultural conflicts resulting from the collision of tradition and modernity in the East and West. Neshat turned to the media of photography and video in an attempt to investigate the role of women and feminism in Islamic society as well as her own status as a self-imposed artist in exile. She considers herself a "passionate inquirer" who "prefers raising questions as opposed to answering them", and her timely and open meditations have solidified her reputation as a cultural cartographer of the spaces where opposites intersect and seemingly stable boundaries collapse.

Although Shirin Neshat lives and works in the United States, her artwork explores issues of her native Islamic society. She uses the specifics of her background culture to create works that communicate universal ideas about loss, meaning, and memory. Shirin Neshat portrays the emotional space of exile in her photographs and films. She questions the role of women in Islamic society, recognizing the tensions between a collective cultural identity and one driven by individual concerns. Neshat uses the chador, the head-to-toe Islamic covering that is mandatory for women in Iran, as an icon for repression and female identity.

She addresses the role of women in Islamic society through compelling photo and video work. Her early work consisted of photos of veil-covered women in extremely compromised or uncomfortable positions with writing across their hands or faces. Her most recent work deals primarily with the transition between art and cinema, allowing for a narrative to create particular characters and has consisted of films in the form of dual video projections. By projecting images on opposing walls, the viewer, who stands in the middle of this work, is engaged in a visual conversation, physically experiencing both screens, thus eliminating the passivity permitted by traditional cinema situations.

In her trilogy of dual projection installations - Turbulent (1998), Rapture (1999), and Fervor (2000) - Neshat examines gender roles in Islamic society. In the first two works, each screen is occupied by actors of one sex, but the characters interact across the boundaries of the projection, listening, looking, and sometimes waving to each other. The viewer, seated within these installations, shares their meeting place. Soliloquy (1999) which she directed and acted in (and is being premiered at the Carnegie International) is a reflection on loss, memory, and dislocation and tells the story of a Muslim woman who is in constant negotiation between East and West, between tradition and present-day pressures. The dual projections that comprise this piece present the artist herself in both the West (filmed in Albany, New York) and the East (filmed in Mardin, Turkey) simultaneously. Pulse (2001) offers a glimpse of the complex interweavings underlying an apparently innocuous situation in which two voices seem to communicate. In Passage (2001), which is accompanied by a sound track from Phillip Glass, Neshat reflects on nature and culture and the meaning assigned to life and death.

The two film installations Mahdokht (2004) and Zarin (2005) mark the beginning of what is to become a five-part feature film entitled Women without Men. Based on a novel of the same name by Shahrnush Parsipur that was published in Tehran in 1989, soon after which it was banned due to its daring, liberal style and the author arrested. This series of films signals her entry into the realm of feature filmmaking and consolidates the mythological turn taken by her work in Tooba (2002). After Parsipur's provocative allegory of life in contemporary Iran, Neshat's newest poetic vision traces the lives of five women who find themselves in a garden of ephemeral paradise having followed fraught and laborious paths to arrive there.

Her videos are made with the help of the musician Sussan Deyhim and the cameraman Ghasem Ebrahimian.

In all of these works, the artist engages in an inquiring but ultimately humanistic investigation into the conflicted nature of contemporary identity in an increasingly globalized world. In Neshat's own words, she engaged in "universal dialogues while keeping within the specificity of the Islamic culture".

Her film installations have appeared at Documenta 11 (2002) alongside many of the major international biennales from Sydney to Kwangju to São Paulo. In 1999 she was honored with the Golden Lion award at the 48th Biennale of Venice in 1999, and in 2004 she was awarded an honorary professorship at the Universität der Künste, Berlin.

In 1996 Neshat's work was presented by Creative Time for Anchorage, Brooklyn Bridge, New York and she was awarded a grant from the Louis Comfort Tiffany Foundation.

Are you Shirin Neshat?