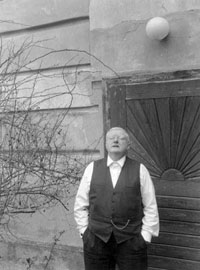 
Peter Kubelka was born in Vienna, Austria, in 1934. Independent Filmmaker since 1952, Peter is a multifaceted artist and theoretician who has worked in the art forms of film, cuisine, music, architecture, speaking and writing. He has been a leading exponent of the international avante garde film and has had screenings in all the European countries as well as in the USA and Japan. His short works helped characterize and define the European and experimental underground cinema of the 1960s. Kubelka studied in Vienna and Rome, and made his first film, "Mosaik im Vertrauen" in 1955. In 1956, when he started to work on Adebar, he developed what he called ´the metric filmª. ´Metricª, derived from the Latin word ´metrumª, means that every part of the film is precisely measured and set into relation to the film as a whole, and that every part of the film communicates with all the other parts. In Adebar, the single units, out of which the film is composed, are 13, 26 and 52 frames long; they follow complex rules which determine their appearance and their consecution within the film. Kubelka has been involved in creating avante garde film collections, a music ensemble and has taught at various universities in the USA and Europe. In addition, he has been a professor in film at the Art Academy in Frankfurt since 1978 where he also served as Rector in the period of 1985-88. Another of his large projects has been his plan for the ideal cinema - The Invisible Cinema - the first draft of which he finished in 1958. In 1964, Kubelka co-founded the Austrian Film Museum and was its curator for many decades.
Are you Peter Kubelka?