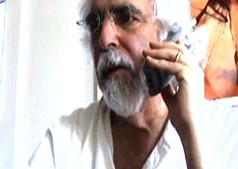 
Peter Campus was born in 1937 in New York to an Eastern European family. His mother nurtured his early interest in art making, but she died when he was 7 years old. Campus studied physiological psychology at Ohio State University, joined the U.S. army and then studied film at the City College Film Institute before working in commercial film and television for 10 years.

By 1969 he was making video, encouraged by the artist Charles Ross. Drawn to existentialism and an informal spirituality and armed with polished commercial film and video skills, Campus' single channel video and video installations drew immediate attention, partially because, as he describes it, "the time was right politically for alternative media to get recognized in the art world."By 1972 Campus was showing with Bykert Gallery, and had a piece in the Whitney Biennial the next year.

Focusing on direct, close up, facial and bodily portraits in reflective psychological struggle, Campus' oeuvre was quite unlike his contemporaries in its sophisticated, confident and aesthetic use of early video technology such as chroma key and closed-circuit video. But although the works were technologically innovative, Campus used technology to explore spiritual and psychological states and not as an end in itself. Furthermore, his portraits were more about depicting shared experiences such as mysticism and fear of death than about subject's individualities. Even in his self-portraits, we read details of Campus' personality as secondary to questions faced by all of us.

In late 1978 Campus stopped making video, and remained absent from it for 17 years. During these years he worked in photography, starting with medium and large format cameras and ending with digital photography.

In 1975 he received a John Simon Guggenheim Fellowship; in 1976 a National Endowment for the Arts Fellowship. He started teaching during an M.I.T. fellowship in , continued at the Rhode Island School of Design, and has taught for the past 24 years at New York University, where he started the Art in Media program.

In 1995 he decided to make video again, exploring the process-based techniques of digital video and sound editing. These works are shorter than his earlier work, like poems in series. Digital sound washes and slow, painterly shots of places such as Long Island and Maine are processed with warm abstraction that expands anthropomorphic feeling to landscape. As in his earlier works, Campus depicts subjects close to him such as his wife, his dog and the beach behind his house in Maine. But the videos transcend portraiture, addressing basic human concepts of almost mythological spirituality.

Currently, in addition to showing regularly at Leslie Tonkonow Artworks + Projects, and in important group shows around the world: the Museo Nacional de Arte Reina Sofia, Madrid, the Hamburger Bahnhof Museum in Berlin, the exhibitions 'Landscape', 'Into the Light' and 'The American Century', (both at the Whitney Museum in New York), he has been the subject of large retrospectives at Kunsthalle Bremen, Germany and Antiguo Colegio de San Ildefonso, Mexico City. His work is in the public collections of the Reina Sofia, Madrid, The Museum of Modern Art, New York, The Whitney Museum of American Art, New York, The San Francisco Museum of Modern Art, Centre Pompidou, Paris, the Hamburger Bahnhof Museum, Berlin and the Kunstmuseum Bern, Switzerland, among many others.

Copies of the works of Peter Campus can be purchased and rented for exhibition in EAI, Video Data Bank.
Are you Peter Campus?