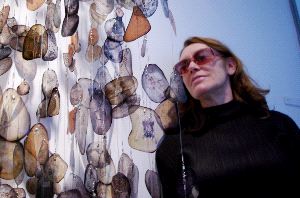 Paloma Navares was born in 1947 in Burgos and studied art at several private institutions. Very soon Navares abandoned the most classic medium of painting in favor of photography, sculptures, installations, collages and performances. Navares is considered to be "the multi-media artist" in spain, a country traditionally dominated by painting in the early seventies. Her complex poetic work deal with female positions in society and above all with the self-determined man. Her Memory, the "inner eye", also plays a central role in her work. Navares suffers from a rare eye disease that once almost caused blindness. Navares works a lot with her memories in order to paint images of her inner landscapes. Her inner eye leads the artist to the most existentialist questions of mankind: ostensible failure and incapacity seem to be the price to pay for posthumously approval. This is the topic her current works deal with in the characteristic complex but sensitive way: beneath the topics of life and death, Navares underlines with subtle, but sweeping certainty fragility and power of art and especially poetry. The white orchids tender buds are a symbol for the great Japanese lyricists, but at the same time a symbol for a society that proceeds with an extreme harshness against any non-conformity. Therefore she refers in her work Sakura No Jana explicit to civil society, which often sees suicide as the only possible choice. Her works are a homage to the great lyricists of our time, whose magnificent work is clouded by their failure, but moreover they present a pleading for the selfdetermined human being. Paloma Navares inquires into a social issue, explores the world of women, rituals, customs and traditions. His visual language is built from the idea of hybridity and supported from its inception in interdisciplinary practice, assembly techniques and media, and use of industrial materials. Photography, video, sound and light are united in their installations, sculptures, objects and collages. Pioneer in media art in the by painting dominated Spain, Paloma creates with her works a prosperous garden of a special kind: subtle and arrogating at the same time Navares takes side for the self-determined artist, but especially for the self-determined human per se: her works are a homage to poets, which – although they accomplished magnificent works – drawn by assumed failure, have chosen their suicide before life.