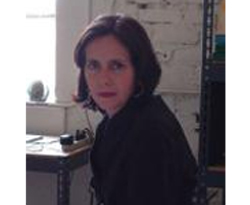 
Kaucyila Brooke is an artist who produces photo and text narratives for installation and publication, photographs, critical texts and works in video art. She has exhibited her work in solo exhibitions at Art Resources Transfer in New York, LACPS in Los Angeles, SF Camerawork and Eye Gallery in San Francisco, Beacon Street in Chicago, Installation in San Diego and A Space in Toronto. Her visual work and writing has appeared in Deborah Bright's The Passionate Camera (Routledge, 1998) and Diane Neumaier's Reframings: New American Feminist Photographers (Temple University Press, 1995). Her video The Boy Mechanic was commissioned by and screened at the Museum of Photographic Arts in San Diego. She co-produced the videotape Dry Kisses Only with Jane Cottis and she is the co-editor of the web magazine Site Street.

For more than two decades Brooke?s work as an artist, activist, writer and project initiator has dealt openly with lesbian identity and experience. In the 1980s a series of portraits of women Brooke got to know ?at the one dyke bar in town ? a Country & Western dance hall? were an attempt to make visible ?a lesbian visual language?. Later her Dry Kisses Only (1990), a collaboration with Jane Cottis, was a critical analysis of women?s relationships in classic Hollywood plots. Moving from film to television, her lush cut-out photographic series ?Tit for Twat? (from 1993) featured Madam and Eve, a naked, frolicking interracial union being shamelessly questioned by talk-show hosts. At this year?s Berlin Biennale, Brooke exhibited a series of photographs of Kathy Acker?s clothes, Untitled from the series of Kathy Acker?s Clothes (1999?2004).

The video component of The Boy Mechanic consists of interviews with mostly middle-aged women who, with an enormous amount of charm and wit, tell Brooke about their favourite women?s bars, the bar owners and décor, and their own experiences.

Her photography and video project The Boy Mechanic (1996 ongoing) was commissioned by the Museum of Photographic Arts in San Diego (1996) and was shown as a multi channel video installation in the exhibition Video as a Female Terrain at the Steirischerbst 2000, Graz, Austria and as a single channel work installed with photographs in the exhibition Hausordenungen at the Stadthaus, Ulm, Germany (2002) and in a solo show at platform, Berlin, Germany (2004). The Los Angeles Edition of The Boy Mechanic premiered at the City of Los Angeles Artist Fellowship Exhibition in 2005 and was subsequently exhibited with the San Diego Edition at Galerie für Zeitgenössische Kunst Leipzig (2006). For the exhibition "The Eighth Square" at the Museum Ludwig, Cologne, Germany (2006) she produced a two sided offset poster which documented the sites and former sites of Cologne's lesbian bar history. Most recently she has focused on San Francisco's history for the exhibition "California Files" at CCA Wattis Institute for Contemporary Art, San Francisco. Her website http://www.theboymechanic.com addresses The Boy Mechainc/Los Angeles and shows documentation of the project so far.

She co-produced the videotape Dry Kisses Only (1990) which has been screened internationally. From 1998 to 2002 she was the co-editor of the web magazine Site Street. She is the former Director of the Program in Photography and Media at CalArts in Los Angeles where she has been a regular member of the faculty since 1992.
Are you Kaucylia Brooke?