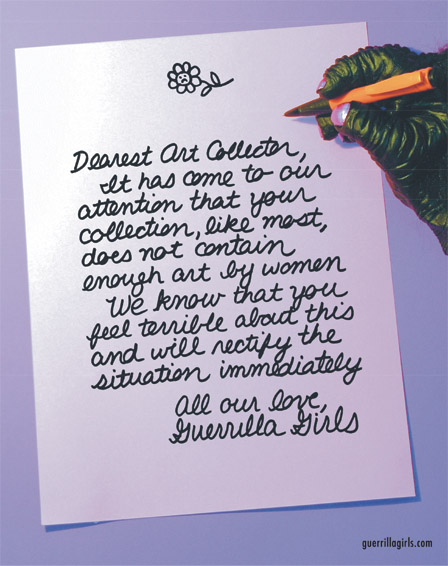 It is not known who the members are in real life, and how many belong to the group. Posters and postcard actions as well as public appearances have addressed the issue that women and non-whites are being excluded from the art world.

«In 18 years we have produced over 100 posters, stickers, books, printed projects, and actions that expose sexism and racism in politics, the art world, film and the culture at large. We use humor to convey information, provoke discussion, and show that feminists can be funny. We wear gorilla masks to focus on the issues rather than our personalities.

Dubbing ourselves the conscience of culture, we declare ourselves feminist counterparts to the mostly male tradition of anonymous do-gooders like Robin Hood, Batman, and the Lone Ranger. Our work has been passed around the world by kindred spirits who we are proud to have as supporters. It has also appeared in hundreds of newspapers and magazines [...]; and in countless art and feminist texts. The mystery surrounding our identities has attracted attention. We could be anyone; we are everywhere.»

Videos downloaded from www.myspace.com with the courteous permission of the artists
Are you Guerrilla Girls?